Where to buy property in Center Eastern, Venezuela 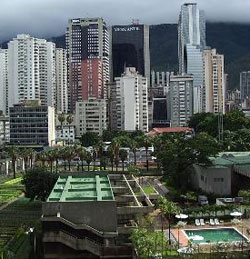 The area has a great number of art and cultural centres. The Museum of Fine Arts contains Venezuelan and international collections, and right next to it is the National Art Gallery which contains works of more than 40 Venezuelan painters. In Teresa Carreño Cultural Complex, art is expressed through ballet, dance, concerts and theatres. Also in the area are the Caracas Athenaeum with cinemas, theatres, and an art gallery, and the Botanical Garden which has an immense collection of tropical palms and plants. The garden belongs to the Universidad Central de Venezuela, the oldest university in the country.

Parque Central in the heart of Caracas is a concrete complex of five high-rise residential towers surrounded by numerous office buildings and civil centres. The area is the city’s art and culture hub – half a dozen museums, the major performing arts centre, two art cinemas and the town’s most formidable theatre are here. The most popular museums are the Museum of Contemporary Art, which houses bold and shocking works by Venezuelan artists like Jesus Soto, and the National Art Gallery, which has a collection of over 3,500 masterpieces. The beautiful Botanical Gardens and the cinema, theatres and art galleries of Ateneo de Caracas are also in the area. Nearby is Universidad Central de Venezuela, the largest university in the city.

In Parque Central, the 725-foot high, 54-storey twin Parque Central Towers hold the record as the tallest buildings in the country. The east tower was badly damaged by fire in 2004 and is still under repair. It is set to open again in the second half of 2010.

Though it remains an important commercial nucleus of the city, Sabana Grande has sadly lost its lustre over the past decade. Its once-pleasant pedestrian promenade, the Sabana Grande Boulevard, has been taken over by hundreds of unauthorized vendors. The area is dirty and menaced by crime. Recently, however, the local government has ordered vendors to leave the boulevard, but it remains to be seen whether the district can stage a comeback.

The Sabana Grande Boulevard stretches for more than three-quarters of a mile long from Plaza Venezuela to Plaza Chacaito. It is surrounded by shops, snack bars, restaurants, and hotels. On the boulevard’s western end are vestiges of the café scene that once attracted masses of strolling Caraqueños. The western end also has many budget hotels. Illicit activities are quite common here, particularly after dark.

Sabana Grande has also been a favourite haunt of artists and intellectuals, who get together in the famous Gran Café or the Suma Bookshop, owned by a Spanish political exile and former republican.

Despite its negative side, the boulevard is still crowded on weekdays and gets even busier on weekends.