Where to buy property in Castile-La Mancha, Spain 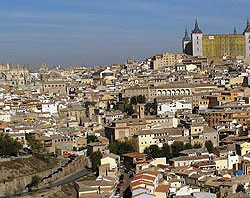 Castile-La Mancha was the setting for the famous novel Don Quixote. Though fairly large, it is perhaps the least populated of the autonomous communities of Spain. The landscape consists of a broad flat plateau with a few mountains surrounded by great mountain ranges. Several major rivers run through this region, including the Tagus, the Guadiana, and the Jucar.

Castile-La Mancha is divided into five provinces: Toledo, Cuenca, Ciudad Real, Albacete, and Guadalajara. Albacete has the largest population but Toledo is the capital.

Toledo is the region's centre of arts and culture. El Greco, the famous painter, made Toledo his home, and to this day the city holds many of his paintings. Toledo has a good number of museums, including one that is based in the old Santa Cruz Hospital. And of course, Toledo is immensely rich in architecture from different periods, including the Moorish era and the Renaissance.

Historic architecture can be seen elsewhere in the region as well. The medieval Cuenca, with a glorious natural backdrop, has interesting hanging houses and an amazing Gothic cathedral set within a wonderfully preserved city center. Cuenca also has an excellent Museum of Abstract Art.

The town of Guadalajara still has most of its Moorish walls and a thousand-year-old bridge. It also has some spectacular churches, including the Mudejar-style Santa Maria la Mayor. The 15th-century Duque del Infantado Palace is located here.