Where to buy property in Carchi, Ecuador 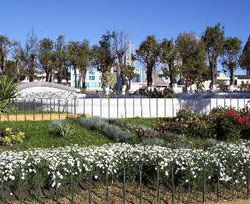 The Volcán Chiles looms over Carchi, Ecuador’s northernmost province. Despite its being an active volcano, people farm on its slopes—montane produce is limited to grains such as barley, oats, wheat, and corn, while sugarcane, coffee, and various fruits are cultivated on the lower regions of the province. Beef and mutton are the province’s main meat products. Carchi also has a growing textile industry.

The volcano is the highest of the five peaks in the province. It is the source of the hot springs of Tres Chorros. The scenic Lagunas Verdes –so named because sulfur from the soil near the volcano lends the waters a green tinge—are five small lakes on a high plateau in the volcano’s foothills. In this environment can be found deer, rabbits, foxes, and bears. Not far away are the high-altitude Laguna Del Voladero, the perfect spot for trout fishing.

There are many other things to see and do in Carchi. One of the province’s interesting archaeological sites are the pre-Columbian ruins on Cerro Chapues. Those who want to go on a boat or horseback ride should head to Las Canoas. And one of the most popular manmade sights in Carchi are the green sculptures of the Tulcán Cemetery—its trees and hedges having been bent and pruned into interesting figures and shapes. 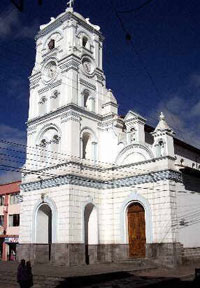 The city of Tulcán is the capital of Carchi, and a busy one at that due to its commercial relationship with Colombia.

One of the highlights of one’s stay in Tulcán should be a visit to its municipal cemetery, where the hedges and cypress trees have been shaped and pruned into interesting traditional figures and shapes. It is an impressive sight. Two blocks from the cemetery is Parque Ayora, Tulcán’s main park.

Casa de la Cultura and Colegio Bolívar Archaeological Museum are both worth checking out, the latter exhibiting artefacts from the ancient Carchi culture. Located southeast of the city is Aguas Hediondas, a watershed with highly mineralized thermal waters that spring from the nearby Volcán Chiles. It is a perfect place to de-stress and recharge. Tulcán also has a popular Sunday market.

The mountain village of Mira offers stunning views of the province and the way to El Ángel, the entrance to the El Ángel Ecological Reserve. The reserve is a humid, 15,700-hectare treeless plateau with several lakes and remarkable fauna comprised of foxes, deer, condors, and curiquingue hawks. Pine and succulent perennials known as frailejon are the two dominant species of flora.

Montúfar is known for the beautiful Paluz waterfall, the myrtle forest of Santa Martha de Cuba, the Laguna del Salado, and the forest of Arrayan are good places for the eco-traveller to explore.

Another interesting geological site here is the Gruta de la Paz, or the Grotto of Peace. Formed by the nearby Apaqui River, it is a cave full of uneven calcium deposits suspended from the cave’s ceiling. Thousands of pilgrims visit this cave dedicated to the Virgin of La Paz to honor her and to bathe in its ambient thermal springs. Close to the cave is a small hotel with a great view run by missionary nuns.