Where to buy property in Carabanchel, Spain 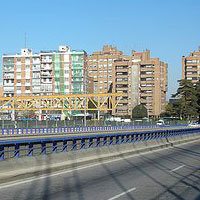 Carabanchel has a large immigrant population—North Africans, South Americans, and Eastern Europeans, among others—making it one of the most diverse areas of Madrid. The place was the site of heavy fighting during the Spanish Civil War. The infamous Carabanchel Prison was built to house political prisoners from the civil war. After the Franco regime, terrorists and ordinary criminals were sent here as well. It was finally closed in 1998 and abandoned, then taken over by squatters and gangs. In 2008, the graffiti-filled ruin was finally demolished and the area set for development.