Where to buy property in Budapest, Hungary 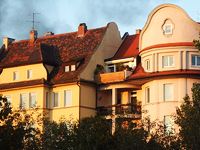 Budapest's glorious buildings and streets are saturated with history's secrets. Particular places of interest in Budapest are: the Parliament, the Opera House, the Citadel and Heroes Square.

After 19 years in the making, the neo-gothic Parliament house was finished in 1904. The third largest Parliament building in the world, it is a majestic landmark. The exterior grounds are ornamented with statues of Hungarian military commanders and monarchs, while the inside is home to the Hungarian crown jewels.

A slightly older building is the Opera House which finished construction in 1884. A neo-renaissance building inside and out, it is the home for much fine and performing art in the city.

The Citadel (Citadella) on the other hand, is a fortress rather than just a building. The white-stoned 19th century fort sits on Gell�rt Hill. The Liberation Monument of a woman grasping a palm leaf for victory stands proudly here, built as a symbol of power by the Austrians after the 1849 Revolution and War of Independence. The Citadel also provides a beautiful panorama of the entire city.

At the end of Andr�ssy Street is Heroes Square, where the Millenary Monument is. This beautiful collection of statues designed by Albert Schickedanz and F�l�p Herczog was erected to celebrate the 1,000th anniversary of the Magyar conquest. The Tomb of the Unknown Soldier is here as well.

Some of Budapest's most spectacular buildings are ecclesiastical. St. Stephen's Basilica is the largest cathedral in Budapest, and though not a basilica in the architectural sense. It began as a neo-classical building, but was later modified to mimic models from the Italian renaissance. With a 96 metre high dome, the cathedral can hold up to 8,500 people.

Arguably one of the most beautiful religious buildings in Europe, and its largest synagogue, is the Synagogue of Pest, on Doh�ny Street. Erected in 1854-59, this masterpiece combines Romantic and Moorish design elements. The ceilings are held up by cast-iron columns, a testament to the enthusiasm for enginerring of the time. A remarkable feature of the synagogue is in the garden named after Swedish diplomat Raoul Wallenberg, who saved many Jews in WWII. There's a memorial sculpture in the shape of a weeping willow, with each leaf bearing the name of a Holocaust victim.

Lastly there is Matthias Church (M�ty�s templom), a building done in early gothic style which has expanded and changed over the centuries. From a church, it became a mosque in 1521, and then became a church, run by the Franciscans and finally, the Jesuits.

Budapest has numerous museums & open-air sites. Those looking for a grand exhibition of Hungarian history must stop by the Hungarian National Museum, where everything from the displayed items, to the frescoes on the wall and the statues found in the garden have significant stories to tell.

In the vicinity of Heroes Square there's the Museum of Fine Arts. The neo-classical building was originally founded through donations of collections, mostly from the Eszterh�zy family. The Museum continued to grow and more acquisitions were made. Notable exhibits are the "Old Picture Gallery" with masterpieces by Spanish painters such as El Greco and Goya, as well as the Egyptian exhibit.

If walking along the Danube, you should watch out for 60 pairs of seemingly abandoned bronze shoes. This is a memorial by sculptor Gyula Pauer who created this in memory of the Hungarians who were shot to death on the riverbank as the Allies entered the city.

Budapest also has the manic dual personality of a developing cosmopolitan city very serious about growing its academic, economic and administrative centers, but it is also a fun place with its smorgasboard of casinos, pulsing underground nightlife, and relaxing medicinal spas. Even the climate in Budapest is at a happy median - not too rainy, or too cold, or too warm.

The Danube River is not the only source of natural waters in the city, as Budapest is also rich in thermal springs. Because of this, numerous Turkish baths, wave baths, hypdrotherapeutic pools, open air swimming pools, and spa hotels are found all over the city. The most noted would be Sz�chenyi, as it is the largest thermal bath in Budapest. From the neo-baroque era, Sz�chenyi is privy to the deepest and thus, warmest wells in the city. These calming waters flow freely in their complex of indoor and outdoor pools. Another well known spa is the Gell�rt Bath. Outside of the relaxing waters of the springs running here, the complex itself is a visual gem. The main hall is crowned with a glass roof and the areas surrounding the pool are held up by great roman-style columns. The entire spa is embellished with many original art-nouveau furnishings, sculptures, mosaics and stained glass windows.