Where to buy property in Brussels Capital Region, Belgium 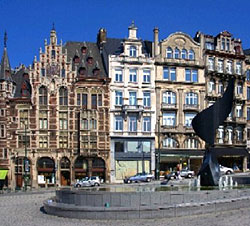 Brussels is the EU’s third richest city in per capita income terms. It is officially bilingual, even though the capital region is inside the Flanders region. It is also one of the most cosmopolitan centres in Europe. Many of the EU’s institutions are here, and EU employees from all over the continent only add to the city’s international, multicultural atmosphere.

Famous places in the capital region include the Royal Palace in the City of Brussels, the Royal Greenhouses in Laken, the odd and futuristic structure known as the Atomium with its giant spheres in Heysel Park, and the large market square known as the Grand’Place, where there is much shopping to do and sights to see. Brussels’ most famous resident can be seen in the nearby Rue d’Etuve: the bronze fountain statue of a small boy relieving himself called the Manneken Pis.

Brussels’ prosperous residents tend to live in the newer neighbourhoods, while those of more modest means live in the older but more historically rich areas near the city centre. Here you can find many 18th and 19th century Flemish townhouses and manors. In the newer neighbourhoods many of the houses were built in the 1920s and 1930s and are often designed in the Art Nouveau style that had been popularized by the architect Victor Horta.

The largest and most important of these municipalities is the City of Brussels, which is the capital of Belgium.

Despite the beautifully preserved medieval beauty of its streets and boulevards, its squares and markets, its buildings and monuments, Brussels is very much a city of the present. It is one of the economic and political centres of Europe, hosting many institutions of the European Community and European Union. It has been ranked one of the most competitive urban areas in Europe for business and industry.

Both Flemish and Walloon halves of the Belgian identity are represented in the city’s history, art, architecture and cuisine. The City of Brussels is officially bilingual, as can be seen in the dual names of its streets and its institutions.

The best residential areas in the City are in the south and the east, which are also the greenest parts of Brussels. Residents live in old stone townhouses, 19th century mansions, newer houses from the 1920s and 1930s built in the Art Deco and Art Nouveau styles, and sturdy apartment buildings. Even the less well-off parts of Brussels—in the north and near the centre of the city—abound with beautiful historic buildings.

The portion of the river Senne that passes through Brussels has been covered over, so Brussels has no riverbanks. Instead, Brussels has the Willebroek canal in the northern part of the city. The industrial area has sprung up around it. 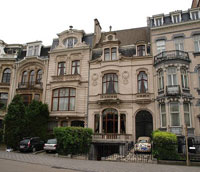 In every part of Brussels you can walk through beautiful parks adorned with marble sculptures and wrought-iron fences, or down wide tree-lined avenues and small cobblestoned side streets, to visit museums and historical buildings or to go shopping.

The city’s most famous shopping street is the Avenue Louise, an elegant 2.7-kilometre stretch going into the city centre. It has luxury hotels (many of them converted old mansions), expensive boutiques, fancy cafés and restaurants.

A more affordable shopping area with a multitude of stores is the Rue Neuve. Sightseers and shoppers can travel southwest down this street until it becomes the larger Rue du Midi, off which is Grand Place.

The Grand’Place, in the very centre of the city, is a large market square that is an ever-lively place full of vendors and shoppers, street artists and performing musicians. In front of it is Brussels’ Gothic-style Town Hall, and the square is surrounded by very old houses which the government has been working to maintain for years.

One of the Grand’Place’s most popular sights is the “flower carpet” of begonias that is laid out on the square every two years. The Grand’Place was chosen as a UNESCO World Heritage Site for its mix of architectural styles—particularly its Gothic and baroque guild houses and its Gothic town hall—and its central place in Brussels' daily life.

Another important gathering place is the Place du Grand Sablon. Every weekend, the open-air Sablon market opens and offers an array of antiques, jewellery, crystal, porcelain and Belgium’s famous chocolates.

Not far from the Sablon market is the grand 18th century Royal Palace, guarded by sentries and stone lions. Across it is the Royal Park, which is open to the public the whole year round.

The Royal Park is only one the many lovely parks and gardens in Brussels. The Bois de la Cambre (or Ter Kamerenbos in Dutch), on the edge of the Sonian Forest, has a small lake with a green island in the centre. In the European Quarter, the Parc de Bruxelles, Parc Cinquantenaire and the Parc Leopold border the royal palace and the buildings of the European Commission. And just outside of the city is the National Botanic Garden in the suburb of Meise, with plant nurseries and hothouses around a 12th century castle. 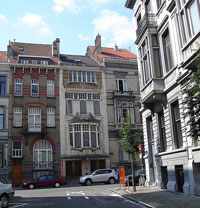 Not far from the Botanic Garden is the Comics Museum. The Belgians love their cartoonists, and none is more beloved than Georges Remi, or Hergé, the creator of Tintin, whose work is exhibited here alongside other Belgian cartoonists’ creations.

Brussels has many historic monuments, but its most famous symbol is the beloved Manneken Pis on the Rue d’Etuve, a small 17th century bronze fountain statue of a little boy urinating. It has been stolen several times in the last 300 years or so, and always returned. It is a focal point of celebrations in Brussels. Sometimes kegs are hooked up to the statue so that it pisses beer.

The City of Brussels has 6 different areas, and each has a distinct character: