Where to buy property in Bolivar, Ecuador 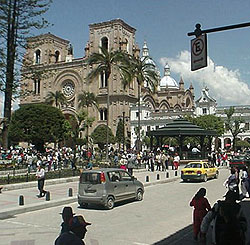 The province of Bolívar has two climates, a cool highland climate and a warmer, subtropical climate in the lower part of the foothills.

Bolívar has a string of fascinating sites, which include the Patacocha and Puricocha lagoons and the monument known as the Ayamaqui Tree—“ayamaqui” means “dead hand” in the Quechua language; the tree got its name during the Ecuadorian War of Independence, when a military commander was executed and his hand severed and placed in the tree. The majestic hills of San Bartolo, El Mirador, San Jacinto, Cruz Loma, Tililac, Loma de Guaranda, and Talalac surround Bolívar’s famous capital. 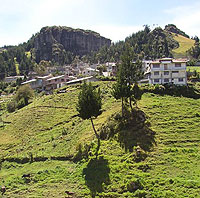 The capital of Bolívar is the tranquil town of Guaranda. It is sometimes called the Rome of the Andes, having been built on seven verdant hills. It is Ecuador’s smallest provincial capital of the country and has a population of only 20,000.

Founded in 1571, Guaranda has pretty much retained the old Spanish flavour as reflected in its white architecture, cobbled streets, and municipal buildings. The Simon Bolívar Park is a popular evening destination among locals. It has a statue of the great South American liberator whose right armpit has served as a support to a bee’s nest for several years.

The statue of Indian chief Guaranda stands in the monument found in the town of Cruz Loma, whose hill gives the best panoramic view of the entire Guaranda. The town has a small museum that houses historical documents, colonial and pre-Columbian artwork, archaeological pieces, and independence arms.

The town of Salinas de Guaranda is known to produce the best cheeses in Ecuador. Salinas also has dye mills and thriving wool and sweets industries. There’s not much to see in the town itself. But its salt mines across the river have salt formations that are very interesting to look at. Salinas also has nice walking, fishing, and horse riding areas.

San Jose de Chimbo is famed for its fine guitars and fireworks. It has an interesting land formation—the pyramid-shaped Zumbi Hill, believed to have been the worshiping ground for the gods Katekil and Cuiche. Catequilla Hill, named after Katekil, has medicinal hot springs frequented by Chimbo locals and tourists.

Chimbo is one of the stops in Bolívar’s “Route of the Saints,” a trail through towns founded by the Spanish in the 1500s that were named after saints. The town’s most popular religious site is the Santuario de Nuestra Señora de la Natividad, which has a Vatican-type square and interesting pre-Hispanic antique pieces. Chimbo also has a religious museum that relates the story of Christ’s shroud.

San Miguel is a canton of Bolívar. Its centre is the peaceful and safe town of Santiago de Bolívar. With its well-preserved pre-Columbian paths, main square, and a church decorated with local paintings, visiting Santiago de Bolívar is like taking a memorable trip to the past. The small town also has facilities and sites for mountain biking, hiking, trekking, bird watching, camping, and river fishing.