Where to buy property in Besiktas District, Turkey 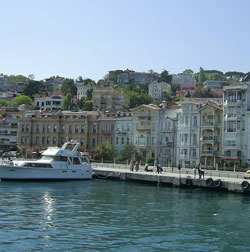 The term “Beşiktaş” means “cradle stone” in Turkish. Based on Byzantine records, an old church had been built here in honour of a relic stone from the stable where Jesus was born. However, the stone disappeared during the Fourth Crusade and there are no traces of the supposed church.

However, another account says that the district got its name from the Ottoman word “bestas”, meaning “five stones”. These referred to the five rock columns along the shores of the Bosphorus channel that are used to moor ships.

Beşiktaş (a prime area) is one of the oldest and most highly developed districts of Istanbul, a top investment property centre with modern residential and commercial areas, including the well-known neighbourhoods of Bebek, Etiler, Levent, Arnavutköy, Ortaköy, Ulus, and Nişantaşı. There are also shopping areas, luxury hotels, schools, a local market, and one of the most popular marinas on the Bosphorus.

Beşiktaş is a district of palaces, many of them on the banks of the Bosphorus. The ones that are still standing are an impressive sight: the ornate, Western-style Dolmabahçe Palace, with lavish rooms and ceilings covered in gold leaf; the vast Yildiz Palace, with its pavilions, greenhouses and porcelain workshops; the coastal summer Feriye Palace, now housing a school; and lovely Ihlamur Pavilion, surrounded by gardens and linden trees and a popular picnic site. 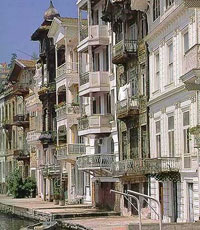 Bebek, which means “baby” in Turkish, is an affluent neighbourhood in Beşiktaş, on the Bosphorus’ European shore.

The suburb has been a popular residential area for centuries. Byzantine bureaucrats settled here, followed by wealthy Armenian families, then Ottoman statesmen. It retains some of its old charm, particularly on the waterside, where small boats are docked and terraced mansions and villas, cafés, and fish restaurants face the Bosphorus.

One historic mansion that stands out on the waterfront is the Art Nouveau Khedive’s Palace, now the Egyptian Consulate. Another impressive site is the 15th century Ottoman Rumeli Hisarı fortress overlooking the narrowest part of the Bosphorus Strait. Today, it is an open-air museum that hosts concerts and plays during summer.

Luxury apartment buildings and restaurants line the waterfront and the roads. A number of yachts are docked in the small bay. The neighbourhood continues to change as more palaces are replaced by apartment blocks, shops, and gas stations. Obliterating the remains of a palace on the hills is an exclusive housing estate behind the Bosphorus University. 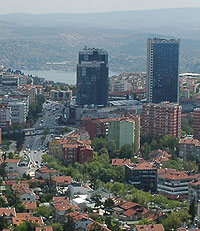 Etiler is an affluent residential suburb in Istanbul’s Beşiktaş district on the Bosphorus’ European shore.

The suburb offers indulgent retail therapy in the Akmerkez and Mayadrom shopping malls and haute couture boutiques. It has a number of chic restaurants, cafés, beauty salons, gyms, and sports clubs. Pubs, bars, and nightclubs define its nightlife. Private villas and sea-view luxury apartments are in demand here. Etiler is a popular choice among expats, whose children attend the British International School. 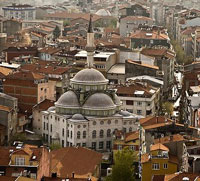 Levent is a business district on the Bosphorus’ western shore. Clusters of office and residential buildings can be found here, such as the 52-floor İş Bankası Tower 1, one of the tallest skyscrapers in Turkey. It has office spaces in 30 floors, an 800-seat theatre, an exhibition gallery, and a reception hall. The upcoming Sapphire Tower will have 54 floors of mixed-use spaces, a shopping centre, a leisure zone, indoor gardens, a swimming pool overlooking the city, and a golf practice area.

The conversion of 1950s villas into office and commercial spaces became a trend when foreign and local companies started coming to Levent. 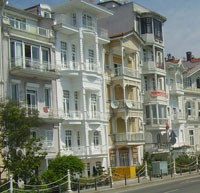 The historic Arnavutköy, which means “Albanian village” in Turkish, is part of the district of Beşiktaş. It is among Istanbul’s most beautiful neighbourhoods, with the prestigious Robert College and old timber mansions facing the waterfront. Arnavutköy has more of these lovely Ottoman frame houses than any other district in Istanbul, and their charm and safety have made them popular among wealthy foreigners, artists and intellectuals. As a result, many of them are still in use.

Many old fish taverns have also survived in Arnavutköy, together with cafés and restaurants along the inner streets. 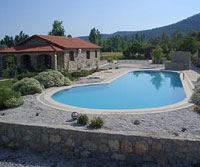 The charming suburb of Ortaköy lies on the European side of Istanbul just below the Bosphorus Bridge, one of the largest suspension bridges in the world, connecting Europe to Asia.

Even as a fishing village during the Ottoman Period, Ortaköy was already a favourite resort of rich Turks because of its location and atmosphere. It continues to attract young and trendy tourists.

Some attractive sites in the suburb are establishments such as the Çirağan Palace Hotel and the Princess Hotel, chic eateries such as the Feriye Restaurant, no-frills cafés and tea houses and bars, shops, and boutiques. Weekend street markets and summer concerts and street shows add to the colourful activity in Ortaköy.

A Christian church, a Jewish synagogue, and a Muslim mosque form a triangle around Ortaköy’s centre. 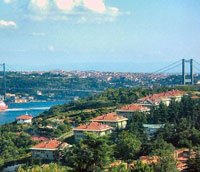 Ulus is an affluent residential neighbourhood with magnificent hillside views of the Bosphorus.

The construction of residential building in Ulus began in the 1960s. Gradually, wealthy families moved into the villas here, and upmarket residential complexes went up in response to the demand. Many of these developments have fitness and sports centres, tennis courts, swimming pools and gardens.

Ulus continues to grow, adding to the landscape theatres, cinemas, and other cultural and entertainment centres taking advantage of the neighbourhood’s enviable location, tranquil pace and well-to-do residents. The trendy Ulus 29 in Ulus Park has an open-air garden terrace with an amazing view of the Bosphorus, and serves fairly good Turkish and Mediterranean cuisine.