Where to buy property in Bekes, Hungary 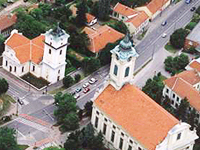 B�k�s County is next to Romania. It has been inhabited since 5000-4000 B.C. After the Turkish occupation the region became almost entirely uninhabited. In the 18th century the county was resettled, with settlers imported from the surrounding countries - as a result, B�k�s population is ethnically varied: there are Romanians, Germans, Slovakians, and Serbians.�

B�k�s County's capital is B�k�scsaba, which has played an important role in Hungary's history. It was an important town in the early 15th century, when the castle of Gyula was built. It was a fortress during the Ottoman wars. �

Today, Gyula has the only intact brick castle in the country, with uniquely Gothic relics and features. The �castle has a theatre, which has opened its doors for over 40 summers. It's a popular venue due to its astounding acoustics.

Popular places to visit are the memorial house of painter Mih�ly Munk�csy, Tessedik S�muel College, which was Europe's first economics school, and the Szarvas Botanical Garden. This famous botanical garden is home to numerous protected plants, such as American sweetgums, oak and mammoth trees, yewtrees, maidenhair trees and palm lilies.

The Mez-hegyes stud farm, founded in 18th century for breeding military horses, is worth visiting. Here a new species, the half-English -breed of Mez-hegyes, was born.

The areas near the river H�rmas-K�r�s are a popular spot for holidays and excursions.

The region is well-known for meat, such as the goose liver of Orosh�za, and the sausages of Gyula and Csaba.