Where to buy property in Bay of Plenty, New Zealand

Explorer Captain James Cook gave the Bay of Plenty its name after the abundant food supplies that were available to the Maori settlements in the region, which was in contrast to Poverty Bay where he and his men had come from. Ironically, despite its prosperous-sounding name, the Bay of Plenty is actually the third most economically deprived region in New Zealand.

The majority of the region’s population is centred in Tauranga, Rotorua and Whakatane. The main industries here are horticulture, forestry and tourism.

Tauranga is a cosmopolitan city with fine cafés and restaurants and a lovely view of Mount Maunganui. At the foot of the volcano is a white sand beach that extends to the city of Whakatane, which is the starting point for expeditions to the active marine volcano of White Island.

Other sites of interest in the Bay of Plenty include the Kaimai Mamaku Forest Park and Te Puke, known as the Kiwifruit Capital of the World. The town of Katikati is famous for its murals and the Haiku Pathway, where English poems and Japanese haiku are engraved on boulders.

The West Bay of Plenty District is composed of the Kaimai, Katikati, Maketu, Te Puke, and Waihi Beach wards.

A region of diverse landscapes, it is characterized by the bush-covered Kaimai Ranges, rolling hills, lakes, rivers and streams that flow through fertile lowlands, and swampy estuaries and mudflats along the Tauranga Harbour.

The West Bay of Plenty is one of the fastest growing districts in New Zealand. Although its current population is around 42,000, it is estimated that the population will balloon to more than 60,000 by 2026. 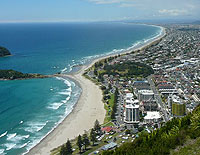 The port city of Tauranga is the largest city in the Bay of Plenty, and the fifth largest urban area in the entire country.

Because it is situated along a faultline, Tauranga has experienced a few minor earthquakes. The dormant volcanoes White Island and Mount Maunganui are also in Tauranga.

Residences in Tauranga range from affluent beachfront mansions to older state houses in lower-income neighbourhoods. Most of the residences that are currently being built are suburban houses with medium-sized backyards.

Generally speaking, Tauranga—especially its largest suburb, Papamoa—is suited to the real estate needs of the affluent.

Find properties for sale in Bay of Plenty, New Zealand