Where to buy property in Banska Bystrica, Slovak Republic 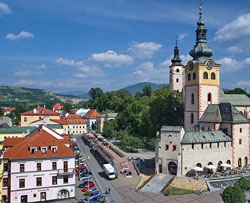 Located in the heart of Slovakia, Banská Bystrica is famous for its hot springs and has become a popular spa holiday destination. The climate here is continental, with warm summers and snowy, cold winters. The region is conveniently connected to the railway network and other international roads, paving the way for a burgeoning tourism industry.

Banská Bystrica’s significant monuments include the Zvolen Castle, where a popular theatre and opera festival is held every summer; Viglas Castle, once the hunting retreat of Hungarian kings; Slovenská L’upča Castle, a 13th century stronghold with three towers over a triangular base; and the Church of St. John the Baptist in Krahule, which is one of the spots that are claimed to be the geographical centre of Europe. There are also some government protected natural reservations in the area, such as the Low Tatras National Park and the scenic areas of Vel’ká Fatra, Štiavnické Vrchy, and Polana.

The region is also historically known for its gold, silver, copper, and zinc deposits. Other important materials found in the region are limestone, ceramic clay, dolomite limestone, gravel, gravel sand, brick earth, pearlite, and basalt. The wealth of minerals and metals in the region has helped its economy prosper. 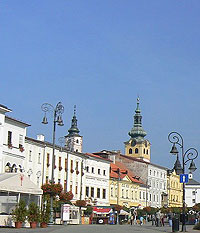 With its easy access to the surrounding mountains, Banská Bystrica is a well-known summer and winter tourist destination.

The city was the centre of anti-Nazi communist opposition in Slovakia during the Second World War. When the insurgents were defeated after the Slovak National Uprising, the city was occupied by the Nazis until its liberation in 1945 by Soviet-Romanian troops.

The post-war years saw the city infused with new life as it became known as a college town (one of Slovakia’s largest universities, Matej Bel, was built here in 1992). Since then it has continued to be a cultural, economic, and administrative centre.

The city is full of interesting historical sites, most of which are concentrated near the city’s central square, Námestie SNP. Named after the Slovak National Uprising, the square is dominated by a 350-year-old clock tower. It is especially beautiful in the summer, with flowers blooming on streets lined with cafés. Among the more curious sights in the area is its leaning tower, whose slant might not be so noticeable as it leans merely 40 centimetres from the perpendicular at the top.

There is also an 18th century column erected as a monument to the Blessed Virgin Mary for putting an end to a deadly plague that ravaged the city. The seat of the city’s Roman Catholic Diocese, the St. Francis Xavier Cathedral is located here as well. There is also a turn of the century Art Nouveau fountain and a black obelisk erected in honour of the Soviet soldiers who died during the city’s liberation in 1945.

The oldest part of the city lies in the edge of the square: the City Castle, once the city’s administrative centre. Surrounding the square are the beautifully preserved mansions of wealthy burghers and noblemen, their Gothic, Baroque, and Renaissance façades a visual feast seen from the street, and veritable treasure troves within. Among the most interesting ones is Thurzó House, which was converted into a museum displaying its fine collection of splendid Gothic-era frescoes. Most of the grand old homes have been converted into cafés, shops, and restaurants.

Apart from its antiquated charm, modernity has seeped into the city. The glitzy Europa Shopping Mall is just a few steps away from the Námestie SNP.