Where to buy property in Ballyfermont, Ireland 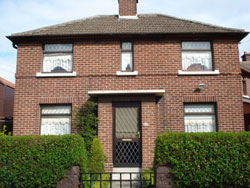 A working-class suburb 7 kilometres from the heart of Dublin, Ballyfermot is conveniently located along main thoroughfares, the River Liffey and the Grand Canal. Directly to its north is Phoenix Park, one of Europe’s largest parks. The neighbourhood has several smaller parks and recreation areas, including the narrow Irish National War Memorial Park. The district is well-provided with shops, restaurants and pubs, a community centre and a bingo and snooker hall that doubles as a concert venue.

The district is mainly known for its industrial areas, mostly along Kylemore Road.