Where to buy property in Alstadt-Lehel, Germany 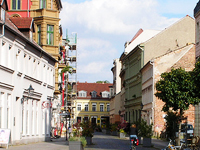 The borough of Altstadt-Lehel includes the historic Altstadt area, which has little housing but is a major commercial district. The beautifully restored old buildings are too many to count, from palaces to churches to museums. The Englischer Garten is one of the biggest public city parks in the world. At 3.7 km� in size, it is larger than New York's Central Park and has a sunbathing area, jogging paths and riding trails. It also has a beer garden in its Chinese Pagoda. The Isar and Eisbach Rivers flow through this park, which was created in 1789.

Like most German cities, Munich was heavily bombed in World War 11. �However its city planners decided on restoration, rather than replacing the ruins with modern buildings.

The Altstadt is the historic core of Munich. A few remnants of its medieval past can still be found. Three out of its seven gates, the Isar, Karl's and Sendlinger, date from the 14th century.� The town hall, a gothic building, dates from 1470-1480; its clock tower is one of the city's distinctive landmarks. Munich's main square, Marienplatz, was where in medieval times tournaments, street entertainment, and occasional executions took place. It continues to be the place to find street performers, from mimes to musicians, and is where festivals and political rallies take place.

Off the square is the all year round farmers - market, Viktualienmarket, with over 100 stalls. The pedestrian (fussg�nger) zone has at least 6 big department stores and a variety of high end boutiques. Among the churches is Munich's cathedral Frauenkirche, with its two cupola capped� domes visible �from almost every corner of the Altstadt. Saint Michaelskirche close by is the largest Italianate renaissance church north of Italy, and is very beautiful.� In Odeonsplatz, not far away, is the Theatinerkirche built in high baroque.

Munich's restaurants are mostly traditional, which inevitably attract tourists to savour Munich's famous� white sausages,� Sauerkraut and pigs knuckles washed down by local beers like Paulaner, Spaten and Hofbrau.� With its museums, theatres, and cinemas, the Altstadt is fascinating, but there is little housing in the area.

Lehel has Bavaria's first rococo church, St Anna and St Lukas church, with its famous renaissance dome. Lehel is becoming an increasingly popular district, as it is walking or cycling distance from the Altstadt. More and more people are rediscovering the allure of its buildings, with their authentic Art Nouveau fa�ades, and neo-renaissance and luxuriously refurbished pre-war residential buildings.

Lehel enjoys excellent public transport, with all the S Bahn lines running through the district and some buses as well. Parking, however, is difficult.

Although Lehel is primarily a residential area, it has a lot of trendy bars, restaurants, cafes, and a vast assortment of shops, including some upscale ones. �

Along Prizrengenten street, which was expanded around 1900 to link Lehel with Bogenhausen, there are at least 10 museums and art galleries, among them the "Haus der Kunst", the national museum, the archaeology museum and the Shack gallery.

The Englischer Garten borders Lehel on the south side and offers recreation throughout the year. Nudists are not forgotten either. There is a special nudist section on the riverbank for the "free body culture" so loved by Germans.