Where to buy property in Alsace, France 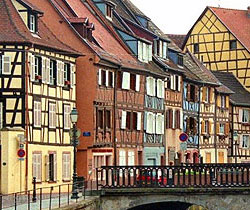 The région of Alsace is known for its picture-postcard towns and villages such as Riquewihr, Ribeauvillé, Obernai, Colmar, and Betschdorf, often featuring traditional half-timbered cottages. Buildings in this style may be found elsewhere in France, but are especially prevalent in Alsace. The regional council actually provides financial grants to homeowners who paint their half-timbered houses in a rich variety of colours, in order to preserve the picturesque quality of Alsatian townscapes.

Alsace has been notable for wine-growing since Roman times, when it was established as a centre of viticulture. Alsace wines have a distinctly German influence, for historical reasons. Alsatian wines include Pinot Gris wines and aromatic wines such as Riesling and Gewürztraminer. The Route des Vins d'Alsace, a famous north-to-south road, ravels through 67 Alsatian wine country communes, from Marlenheim to Thann. During the October harvest, many communes celebrate wine festivals. 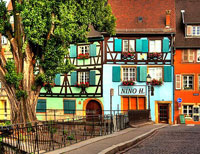 True to its Germanic roots, Alsace is the main beer-producing région of France, with a number of key breweries in and around Strasbourg. Among these are: Kronenbourg, Fischer, Heineken International, Météor, Kasteel Cru and Kanterbräu. Half of the beer produced in France comes from Alsace.

Alsace is home to a wide variety of industries, including chemical, electronic, textile, food production, and auto industries, which are primarily located in the Haut-Rhin département. The Peugeot-Citroën automobile factory, the Wrigley chewing gum company, and Sony France are all located in Haut-Rhin.

Geographically, Alsace is on the eastern edge of France, bordering Germany and Switzerland, on the plain of the Rhine, with the Vosges Mountains to the west. Lush green forest covers much of the lower slopes of the Vosges range, and the famous Château du Haut-Kœnigsbourg overlooks the Alsatian plain from the Vosges. Alsace possesses the highest concentration of feudal castles in Europe, testament to a history of warfare and tumult.

Alsace’s climate does not have the best reputation, due to its harsh and snowy winters. In contrast, Alsatian summers tend to be hot and dry, and are a good time to seek out the cooler air in the higher areas of the Vosges. Spring and autumn are climatically more attractive.

Many of the vineyards and "postcard" villages of Alsace, including the popular tourist destination of Colmar, are located in the southern Vosges area. The northern Vosges area ("Alsace Bossue") is less heralded in comparison, and thus less frequented by tourists. But there are at least a couple of attractive towns in the Alsace Bossue, namely Saverne and Wissembourg. 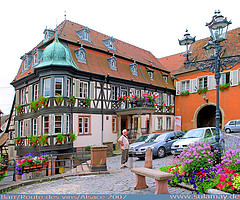 The major cities of Alsace are Strasbourg in Bas-Rhin and Mulhouse in Haut-Rhin. Strasbourg is the capital city of Alsace and the seat of the Council of Europe, the European Parliament, and the European Court of Human Rights. The city fittingly styles itself "le Carrefour de l'Europe" or the crossroads of Europe.

The Strasbourg Cathedral is the city's most prominent landmark. This medieval structure is a prime specimen of late Gothic architecture, and is also known for its 19th-century astronomical clock. The historic centre of Strasbourg, known as the Grande Île, is classified as a UNESCO World Heritage Site. Petite-France, an area within the Grande Île, is notable for its sixteenth- and seventeenth-century half-timbered  houses.

Although Strasbourg can be very cold in the winter, it is nevertheless a lovely city during Christmas, when Strasbourg becomes especially festive and full of life.