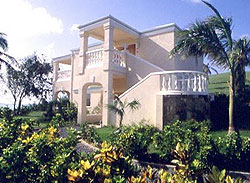 You are pleasantly exhausted after a day of duty-free shopping and exploring beautiful, historic districts. With a cool rum drink in hand and the warmth of the sun radiating off your skin, you drift off to the hypnotic syncopation of a scratch band and the gentle lapping of waves in the distance. You awake in time to join your friends for dinner—a Caribbean delight, from the tangy fish soup to the barbecued ribs to the fresh fruit. After a good night’s rest, you open your eyes with the knowledge that you can do everything all over again, and yet it will be a new experience every time. Welcome to the U.S. Virgin Islands.

The USVI, as it is also known, is comprised of the islands of St. Thomas, St. John and St. Croix, and dozens of smaller islands surrounding them in the shimmering Caribbean Sea. The USVI has a population of 110,000.

The first recorded inhabitants of the islands were the Ciboneys. But it was the Caribs who were around when Christopher Columbus found his way to the southernmost island in 1493. He named it Santa Cruz and claimed the islands for Spain. The British, the Dutch and the French also occupied the island at some point, usually warring against each other and the local population, until the Spanish reclaimed it in 1650. They were eventually ousted by the French, who renamed the island St. Croix. In 1733, the French West India Company sold the island to its Danish counterpart. The Danes had already established settlements on St. Thomas in 1672 and St. John in 1694. These two islands, situated very close to each other, are both about 60 kilometres north of St. Croix.

St. Thomas became a slave-trading post in 1685 when over 200,000 slaves from Africa’s west coast arrived to work on the cane, cotton and indigo plantations that had sprung up all over St. John and St. Croix. The British occupied the islands again in 1807, only to return them to Denmark eight years later. The islands remained the Danish West Indies until they were purchased by the United States in 1917. It remains an unincorporated United States territory.

The Caribbean region is an earthly paradise of beaches, sun and laid-back island lifestyles, and the USVI is no exception. The territory is a tourist magnet, more than a million visitors every year, mainly from the mainland US. Most come to the islands by sea; the USVI is a major port of call for most cruise lines. 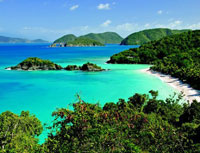 Of the three islands, St. Thomas is the most commercially developed, the best place to go for shopping and night life. Property prices run a little higher here than in the rest of the territory. The USVI’s capital, Charlotte Amalie, is on this island.

If St. Thomas offers vacationers an urban resort type of experience, St. Croix has the Old World class and the more sedate charm of its historic towns, Christiansted and Frederiksted.

St. John is the smallest and least developed of the three islands. Over two thirds of it is part of the Virgin Islands National Park.

It is impossible to speak of USVI and not bring up its festive atmosphere—its bustling daytime hotspots and lively night life, the richly flavoured food, the delicious drinks, and the evocative music. Unique to USVI is quelbe, or scratch, a vocal and instrumental style of folk music that developed among the slaves in the plantations. Scratch bands use banjos and conga drums, and usually supplement these with guitars, bass, saxophone and flute. The music has evolved through the years, though its sound can still be traced to African rhythms and the beat of Danish military bands.

The islands’ past as a Danish colony can also be seen in the style of the red-roofed homes and the yellow ballast-brick forts and churches, the street names, the names of the major towns—and the steady influx of Danish tourists to the islands every year.

The local cuisine is a clever collaboration between its indigenous Indian, European and African cuisines: barbecues from the native Indians, spicy curry from Indian servants brought over by the colonists, and recipes using beef, wheat, onions and garlic from the Europeans.

The best food in the USVI is cooked by the locals—delectable dishes from recipes that have been handed down through the generations. Due to their sugarcane and molasses production, the Caribbean has a great rum tradition. In the USVI, the main producer is Cruzan Rum, a strong and distinctive rum manufactured on St. Croix. The company holds factory tours for those who want to see how the drink is manufactured.

All these cultural elements come together during the biggest party of the year: the Carnival. Each island celebrates the Carnival at different times of the year, but the elements are the same—colourful and extravagant costumes, lively Caribbean music, raucous street celebrations, fireworks, food and drink booths, crafts fairs and parades. 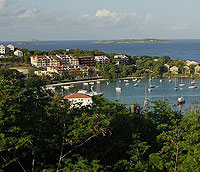 The U.S. Virgin Islands has become such a popular destination that many visitors to the islands have become residents as well, purchasing second homes here. The majority of these buyers are Americans, attracted to the prospect of living in gorgeous Caribbean surroundings while also enjoying the benefits of U.S. laws and services and an English-speaking population.

The best places to stay in the Islands take advantage of the sun, the ocean breezes and the beautiful views. Many of the villas and hotels in the territory are situated to face the jewel-like blue-green of the Caribbean. They are also close to the duty-free shopping districts and the entertainment and recreation spots—everything from the beaches to the bars.

The weather is at a balmy constant throughout the year, though rains and hurricanes hit the territory from August to November. The busy tourist season stretches from December to May.

Find properties for sale in US Virgin Is.