Where to buy property in Siberian Federal District, Russia 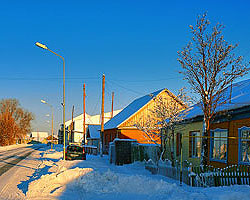 The term "Siberia" is often used to refer to Russia's entire Asian portion, except for the Far Eastern Federal District. But the Siberian Federal District consists only of the centremost of Russia's three Asian districts. It ranges from the islands in the Arctic Ocean at the tip of Krasnoyarsk Krai to the centre of Eurasia, the Republics of Altai and Tyva on the semi-desert Mongolian border.

Krasnoyarsk is the largest of the district's subjects, and accounts for more than 3% of the country's industrial output. Almost half of the district's timber output comes from Krasnoyarsk. Most of the commercial and industrial activity in Krasnoyarsk is concentrated in the south. It is bordered by the Irkutsk Oblast, which also has abundant natural resources - the 7th largest region in the country, it has 10% of Russia's forest lands, 10% of its gold and 10% of its water resources.

The capital of Novosibirsk Oblast is Novosibirsk. It is Russia's third largest city, after Moscow and St Petersburg. It is a major centre of science; this is where some of Russia's top scientists have made significant discoveries. Novosibirsk is also the administrative centre of the Siberian Federal District. It is about a century old.

Summers in the city can be quite hot, and winters very cold. Russia's fourth longest river, the Ob, goes through Novosibirsk.

Quite appropriately for the largest Russian city east of the Urals, Novosibirsk has quite a few other "largests" to boast about: The Novosibirsk State Academic Opera and Ballet Theatre on Krasny Prospekt is the largest theatre in Russia, and is an architectural gem as well - its large silver dome is very distinctive and a brilliant work of engineering. It is the only federal theatre of its kind established in Asian Russia. The Novosibirsk Railway Station is the largest railway station on the Trans-Siberian route - only reasonable as Novosibirsk is the major hub along the route, and all the trains stop here. The Novosibirsk State Regional Scientific Library is the biggest library in Siberia. These institutions are quite well-funded, as well: the theatre has state-of-the-art equipment, and the railway station has been newly renovated.

The Akademgorodok is the city's centre of education, a complex of scientific and academic institutions in the middle of a pine forest. The Novosibirsk State University and several research facilities are here.

To its south is the Ukok Plateau which is part of the Golden Mountains of Altai, a World Heritage Site. This area has a continental climate, with extremely cold winters and plenty of light snow. It is usually sunny here. The brief summers are lovely and warm with occasional rainy days. In spring, it is quite cold, and the streets are unattractively muddy.

Housing in Novosibirsk consists mostly of apartment blocks, except in some cases of the very wealthy living in private residences, or the poor living in old homes. Apartment buildings are not very high here - they usually do not go higher than 5 or 6 storeys.