Where to buy property in Malaysia 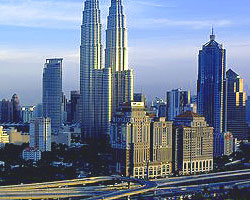 Malaysia is a divided country, cut into two portions by the sea. Peninsular Malaysia lies south of Thailand, and is bordered on the west by the Strait of Malacca. Across the South China Sea are Malaysia's eastern states of Sabah and Sarawak and the federal territory of Labuan, which cover the north of the island of Borneo, except for the enclave of Brunei.

For centuries Hindu and Malay kingdoms, and later Malay sultanates, occupied areas or parts of the areas that came to be the Malaysian states. Large parts of the territory that is now the present country also became part of the Srivijayan and Majapahit empires. At the same time, these kingdoms, sultanates and empires had trade and diplomatic relations with their Asian neighbours before the Europeans came.

Melaka (Malacca) was actively engaged in trade with Chinese and Indian spice traders, but was invaded in succession by the Portuguese, the Dutch and ultimately by the British.

The Dutch and the British began banding the sultanates together in the early 19th century. The Dutch had control of the south of the peninsula, and the British the northern portion Melaka, Penang and Singapore which were called the British Straits Settlements.

At the end of the 19th century, the British oversaw the formation of the Federated Malay States in the peninsula, made up of Pahang, Perak, Selangor and Negeri Sembilan. Through the British North Borneo Company, the British also acquired the sultanate of Sabah and the island of Labuan, and eventually Sarawak too. The Siamese kingdom turned over to the British their former vassals of Kedah, Kelantan, Perlis and Terengganu, which became the Unfederated Malay States.

Soon after World War II, the British proposed the formation of the Malayan Union, which would put together the Federated and Unfederated Malay States, as well as Penang and Melaka, but minus Singapore, which was made a Crown Colony.

Malay nationalists had other ideas, and opposed the Union until it was disbanded and replaced by the Federation of Malaya, which gave more power to the Malays. The communist unrest from 1948 increased nationalist fervour, and the Malayan states united in a historic federal election in 1955, paving the way for the creation of the present-day Federation.

In 1963, British North Borneo (now Sabah), Sarawak and Singapore and joined with the Federation of Malaya (which consisted of Johor, Kedah, Kelantan, Negeri Sembilan, Pahang, Perak, Perlis, Selangor and Terengganu and the British settlements of Penang and Malacca) to form Malaysia. The new country was recognized by the United Nations, but two years later Singapore was separated from the federation and became an independent nation. Today the Federation has 13 states and 3 federal territories, with 11 states and 2 federal territories occupying the peninsula, Sabah, Sarawak on the island of north Borneo, and the island Federal Territory of Labuan in the South China Sea just off the Borneo coast.

The colourful history of Malaysia is reflected in the racial variety of its population. Aside from the aboriginal settlers called the Orang Asli, who can still be found in rural areas, the federation's population is divided into three major race groups: the Malays, who claim Indonesian and Arab lineage, and the Chinese and the Indians.

There are also Eurasians, Malaysians with mixed lineage, and other ethnic groups mostly from Sarawak and Sabah. Malays comprise the majority in most states, although a few states have a Chinese majority, and some are evenly mixed, with Sarawak having no clear dominant race.

The official language is Malay, called Bahasa Melayu, although English is used in schools and most Malaysians know at least some English, especially in the urban areas. Locals have their own form of English combined with Malay, called "Manglish". Many local Chinese speak Mandarin or Cantonese. Most of the Indians in Malaysia are Tamils, so they mostly speak Tamil. Malaysian ethnic groups also speak dialects such as Iban and Kadazan.

Malaysia's geography is diverse. Its mountainous regions offer refreshingly cool highland weather, and its coastal areas can be warm and humid, or wet and windy, depending on the time of year. Malaysia sits on one of the world's biggest deposits of tin, and has a sizeable supply of petroleum and natural gas. Its major agricultural products are timber, rubber and palm oil.

Melaka and Penang offer interesting colonial-era architecture, and fine examples of hybrid, mixed architectural styles. Sarawak and Sabah have amazing natural attractions, such as the world's oldest rainforest. Sarawak's Gunung Mulu National Park, Sabah's Mount Kinabalu and Kinabalu National Park's stunning natural wonders have made them World Heritage Sites. The UN has also listed Kedah's Langkawi Islands as a World Geopark, noting that it has some of the world's oldest rock formations.

Approximately 60% of Malaysians are Muslim. Around 20% are Buddhist (mostly the ethnic Chinese, who make up about a quarter of the population) and 10% are Christian (many of whom are from Sarawak and Sabah), 6% are Hindu and the rest practice other faith traditions (ethnic Malays are all counted as Muslims). One way to enjoy Malaysia's multicultural heritage is through its cuisine, which can be sampled at the ubiquitous hawker stalls and the all-important mamak food stalls and eateries that are open day and night, with some even offering air-conditioning and Wi-Fi services.

Mamak are traditional dining eateries run by Indian Muslims, serving teh tarik, which is hot tea "pulled" from one container into another and served with milk, various types of rice and noodle dishes, and roti canai, a type of flatbread. Mamak stalls are popular local hangouts, especially at nightspots, but they usually close at noon for daily prayers and during Muslim fasting seasons.

While it is a largely conservative society, Malaysia is also very much a nation with an eye on the future. Its development is geared toward industrialisation and urbanisation. The national capital Kuala Lumpur and neighbouring areas are increasingly popular with expatriates, partly because Malaysia has relatively lenient property ownership laws compared to its Asian neighbours.