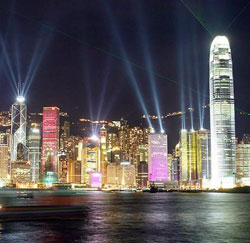 Crowded and polluted, vibrant and ever-awake, Hong Kong is the one of the world’s most important hubs of culture, commerce and finance.

Hong Kong consists of a peninsula on the Chinese mainland and over 230 islands in the South China Sea. When its sovereignty was transferred from Britain to China in 1997, it became a Special Administrative Region of the latter. Under the idea of “one country, two systems”, Hong Kong has its own capitalist economic and political systems separate from those of China. It remains mostly autonomous of China’s central government.

Hong Kong is attractive to international investors and tourists for a number of reasons. It is politically and financially stable, and hosts the Asian headquarters of many multinational companies. English is spoken widely and is one of the official languages of the Special Administrative Region. Maps and signs are bilingual, and it is not difficult to find one’s way around. There are many forms of public transport in Hong Kong, mostly efficient and well-run: train, tram, colour-coded taxi (red in Hong Kong, green in the New Territories, blue on Lantau Island), bus, ferry, and the Mass Transit Railway, or MTR.

Doing business in Hong Kong is easy. For decades, its economy has been ranked as the freest in the world by various experts and think tanks. 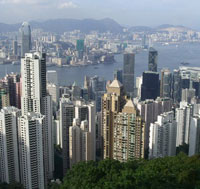 Consequently, there is a large international community that gives the administrative region a very cosmopolitan feel. The city never sleeps; it is common to see locals doing their grocery shopping late at night or people partying in bars and clubs until dawn. Hong Kong is also famous for its infinite culinary options. Top chefs from all over China and the world are attracted by the sophisticated palates and thick wallets of Hong Kong’s residents and visitors. Elegant restaurants are often fully booked, but tasty dim sum and other familiar Chinese food can also be found anywhere, anytime and in any price range.

Since most of the territory is mountainous, there are many high places where you can enjoy breathtaking vistas of the city, the islands and the sea.  The government has also made efforts to protect parks and beaches, and they are easily accessible by a modern and extensive round-the-clock public transportation system. Hong Kong is extremely pedestrian- friendly; escalators, covered walkways, and air conditioned stations make trips around the city a breeze.

Seven million Hong Kongers live in a territory where land is at a premium. It is one of the most densely populated regions in the world, and land continues to be reclaimed in the harbour.

The city is ever changing. Classic colonial-era buildings remain where they have been for centuries, but are now nestled among the ultramodern skyscrapers; it is common for preserved ancient Chinese villages to be within metres of modern housing development.

Hong Kong SAR can be divided into the three main regions of Hong Kong Island, Kowloon, and The New Territories, and over 200 offshore islands. 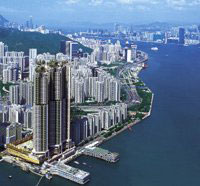 The region of Hong Kong Island was acquired by the British in 1842 in the treaty that ended the first Opium War. The nerve centre of British rule was here, and the old colonial Court House, the post office, the jail and the officials’ mansions still perch on steep slopes overlooking Victoria Harbour. In the Central district, the way skyscrapers, 5-star hotels and large malls were built on such dense and steep slopes is an engineering marvel.

Behind the ridge to the south of the island are quiet villages favoured by the affluent, many of them expatriates. On the coast are the private Hong Kong Country Club and Ocean Park, which is open to all. There are open spaces and parks in the island’s central hills.

Hong Kong Island is divided into the Central and Western, Eastern, Wanchai and Southern districts.

The region of Kowloon is composed of the Kowloon Peninsula and New Kowloon, though the latter is statutorily still part of the New Territories.

Kowloon’s skyline is lower and less dramatic than in the rest of the territory, due to building height restrictions when the airport was nearby. Many of the neighbourhoods here are quite gritty, but there are also new luxury developments. Kowloon Tong is a top residential area among actors and celebrities.

The southernmost neighbourhood of Kowloon, Tsim Sha Tsui, has developed into a high-end shopping, cultural and tourist district. Generally, Kowloon districts have a more local feel and are packed with street markets, like the electronics market of Sham Shui Po or the wholesale markets of Cheung Sha Wan Road. This is a bargain hunter’s heaven. 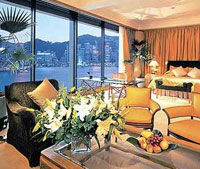 The region of The New Territories flanks Kowloon and Hong Kong Island on three sides and includes the outlying Islands in the Pearl River Delta and the South China Sea.

Much of the New Territories was rural, agricultural land until the 1970s, when “new towns”, or planned communities, were built in response to the population boom in Kowloon and Hong Kong Island.

For most people, the name “Hong Kong” brings to mind the bright lights and crowded streets of a cosmopolitan, ever-active city, but the region is also blessed with majestic mountains, large country parks, and sunny beaches, delightful old monasteries that are still in use and ancient villages restored as national monuments. This refreshing side of Hong Kong SAR is mostly found in the New Territories.

Lantau is the biggest of the outlying islands. It has the Chek Lap Kok International Airport, Hong Kong Disneyland, and the Big Buddha, a giant bronze statue that sits on a highland overlooking the Territories.

Some islands also have exclusive resort-like residential developments along the coast. The smaller, more remote islands where small fishing communities thrive and host traditional festivals can be reached by ferry. Piers and pristine man-made beaches are a welcome sight for workers disembarking from the ferries on their way home.

Search for properties in Hong Kong