Where to buy property in Cape Verde

A collective voice articulating sadness and nostalgia arises from a country that carries a history of slavery and dissent. Such is the case in Cape Verde, where the national music, morna, becomes the people’s unifying voice and the one distinct definition of its culture.

Morna is a melodic, lovelorn song reminiscent of the Portuguese fado, but made unique by its Creole language and performance, and the accompaniment of primitive instruments. It is very alive in Cape Verde’s group of 10 volcanic islands, which is subdivided into the windward Barlavento island group and the leeward Sotavento group.

The Cape Verde archipelago is a beautiful mix of high mountains and expansive deserts, lush valleys and volcanic beaches. Each island carries its own attraction, from Portuguese colonial architecture to tourist-inclined resort developments, from British legacies to African ways of life, from crater plantations to natural swimming pools, from sand dunes to rock formations, from traditional music festivals to infamous nightclubs.

Once an important salt collecting centre, Cape Verde now relies on tourism and agriculture. Coffee planting, production of wine and grogue (sugar-cane based rum), cattle breeding, and fishing are the locals’ preoccupations. Emigration to North America is very common in some islands, and remittances from expatriate Cape Verdeans also help the economy. 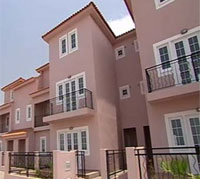 Residential tourism is fast rising in Cape Verde, with developments of many luxury residential complexes in islands such as Sal and São Vicente. Beachfront properties are the highly-desired investments here. Some exclusive complexes target jet setters, while others accommodate wealthy yachtsmen.

As Cape Verde is also famous worldwide for windsurfing and other water sports, it is only a matter of time till it becomes a highly developed nation. One can only hope that its natural reserves remain preserved, and morna, together with the lively rhythm of funana and the echoes of batuque drums, continue to resonate in the islands.