Where to buy property in 16th District, Austria 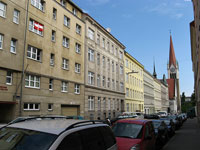 The 15th and 16th districts of Vienna have the highest immigrant population in the city. Ottakring, the 16th district, lies a little west of the city centre. Housing here is quite cheap but conditions are very poor, and many apartments don't have indoor bathrooms or other basic amenities. As for attractions, Ottakring does offer a few lovely old villas, such as Schloss Wilhelminenberg and Villa Aurora, which are located in the hilly part of Ottakring. However, as a whole there's not much reason to go to Ottakring.