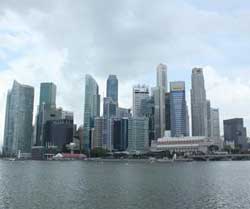 For the first time, the number of high net worth individuals (HNWIs) in the Asia-Pacific Region has surpassed counterparts in the North American region, according to the  2012 World Wealth Report, released Wednesday by Capgemini and its new partner, RBC Wealth Management.

The number of HNWIs, classified with having investable assets of US$1 million or more excluding other assets such as primary residence, collectibles, consumables, and consumer durables, rose by 1.6% to 3.37 million in 2011, beating their North American counterparts with a population of 3.35 million HNWIs.

The global population of Ultra-HNWIs declined by 2.5 % in 2011 and its wealth declined by 4.9 % after increasing by 10.2 % and 11.5 %, respectively in 2010. (Ultra-HNWIs are defined as those having investable assets of US$30 million or more, excluding primary residence, collectibles, consumables, and consumer durables)

The HNWI population country ranking saw South Korea replace India for the 12th position, while the top three countries, U.S., Japan and Germany, retained 53.3 % of the total share of HNWIs, slightly up from 53.1% in 2010. Of the top twelve countries by population, Brazil saw the greatest percentage age rise (6.2 %) in the number of HNWIs.

“While  more  people  surpassed the US$1 million disposable income level in 2011,  the aggregate wealth of high net worth individuals declined overall, as  market  volatility  took  its toll," said George Lewis, Group Head, RBC Wealth  Management.  “It is  significant that for the first time this year there  are  now more high net worth individuals in Asia-Pacific than in any other  region. However, losses in key markets such as Hong Kong and India meant that wealth contracted in Asia-Pacific overall.”