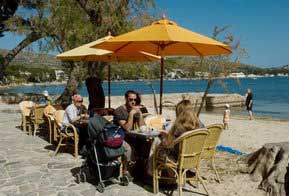 With the summer holidays hot on its heels, families across Britain will be packing up their suitcases ready for some much-needed spring sunshine. Travel agent Direct Holidays predicts that Spain will be the top choice of holiday destinations for Brits during 2013, just as it was during 2012.

Data for the month of January released recently by the Spanish Ministry for Industry seems to support this prediction, with tourists spending 6.5% more when compared with January 2012. In fact, the Spanish Institute for Tourism Studies (IET) has just declared that 2012 was Spain's third most successful year in tourism to date, with the majority of tourists coming from the UK.

With abundant sunshine, beautiful beaches and plentiful tapas, it's easy to see why Spain is such a popular destination. But it's not just Spain's scenic and gastronomic features that have kept it at the holiday venue top spot.

According to the latest Post Office Worldwide Holiday Costs Barometer, which examines a range of costs from sun-cream to meals out, Spain is the cheapest holiday destination in Europe, something no family can afford to ignore during these trying economic times. TheMoveChannel.com backs this view, calling Spain's largest Balearic Island of Mallorca 'the perfect holiday destination for those looking for a great value break.'

For some families though, a holiday to Spain just isn't enough and the merits of making their stay a bit more permanent prove too tempting to resist. Taylor Wimpey España, the award-winning Spanish arm of leading UK house builder Taylor Wimpey, saw sales of its Spanish properties to British owners soar during 2012, with figures up 24% on the previous year.

"Spain has held a place in British holidaymakers' hearts for decades, but now we are finding that more and more Brits are wanting more than just a holiday," notes Mr. Marc Pritchard, Sales and Marketing Director of Taylor Wimpey España.

Buyers, according to Mr. Pritchard, are looking for permanent or second homes in Spain, taking advantage of the country's current bargain property prices.

Mallorca and the Costa Blanca are proving particularly popular areas, with their obvious delights of wide sandy beaches and charming laidback towns.

With only nine apartments in the building, each with its own private terrace or roof terrace, and prices from just €275,000, it is clear why the properties are in such demand. A swimming pool, solarium and underground parking complete the exceptional development.

Over on the Costa Blanca, with direct access onto Paraíso beach, La Vila Paradís is proving equally popular with British buyers. The beachfront two and three bedroom apartments, costing from as little as €249,000, showcase the high quality accommodation on which Taylor Wimpey España's excellent reputation has been built. Delightful landscaped gardens and a pretty communal pool are backed by stunning views of the Mediterranean - a setting guaranteed to capture the heart. With properties like this on offer for such bargain prices, it is clear to see why so many Brits have been tempted to make it more than just a holiday and invest in their dream home in Spain.