On10th June, the Central Bank of Malta released its 1st Quarterly Review for 2010, analysing the economic and financial developments for Q4 2009 and Q1 2010. Of particular importance to us of course is the snapshot this provides of the property market during this period.

The Central Bank's residential price index is based upon the advertised residential property prices compiled monthly from newspaper adverts. Therefore this report has to be interpreted together with the National Statistics Office (NSO) Quarterly report, which is published separately and which compiles monthly information drawn from contracts of sale registered with the Inland Revenue Department. However the latest NSO quarterly report is for Q1 2009.

Further analysis is also required to interpret Chart 2 within the CBM Q1 2010 report, which plots the annual percentage change in residential prices by category, with percentage change on the y-axis and the time period spanning Q1 2007 to Q4 2009 on the x-axis. The various property categories are colour coded, however both the Apartments and the Maisonettes trend lines do not differentiate between the performance of shell form and finished units. A further point to be considered is whether the term maisonette is specifying the original concept of a property in a block of two or three similar properties with independent entrances, or the later devolution including a groundfloor apartment underlying an apartment block, but with a separate private entrance. 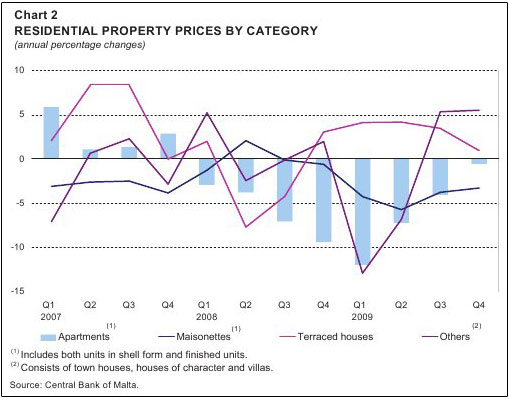 Remaining within Chart 2 (pg 34) we also find the last category of properties entitled "Others", which includes townhouses, houses of character and villas. Caution is also required here since a significant number of this last category are initially marketed at prices reflecting commercial development, as plots or sites, and not residential. This would explain the sudden drop into negative territory of the trend line related to this category, given the latest glut in new development applications. The NSO statistics will eventually shed a light on how many in this category were indeed sold off as residences, and how many for development and speculative purposes.

Overall, the Central Bank's analysis infers that the relatively modest fall in the index towards the end of 2009 can be interpreted as the bottoming out of the previous negative trend, and that prices on the residential property market may be stabilising. It also suggested that the drop in the supply of properties coming onto the market may also be moderating. However overall, in 2009, average property prices were 5% lower.

From the Malta Property Blog