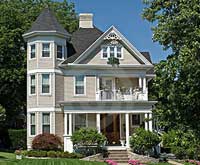 There is now an emerging property choice among the new tech millionaires in Silicon Valley. Facebook's and other company executives are shunning away  the huge mansion type homes.

Facebook's team and the new tech millionaires in the block, which includes Google's, Twitter’s, and Zynga’s executives, have opted for the unassuming abode that surprises some property sellers in the area.

According to a Wall Street Journal report, they have selected single detached homes with Old Victorian designs or at times condominiums that are with the 1970s flare.

San Francisco, California is not only home to America’s new tech millionaires at Silicon Valley it will be the next big let-in market in the country for the forthcoming America’s Cup in 2013.

Barely halfway through the preparations for the race which begins July 2012, 12 home owners near the bay area have listed their homes as possible rentals because of the potential earnings to be drawn by the regatta which expects some 1.2 million spectators.

Reports from Wall Street Journal confirmed homeowners in the San Francisco Bay area are excited to be landlords even for the duration of the race.

Mr. Larry and Mrs. Marjorie Schelenoff told the Wall Street Journal that they will rent out their 3,100 square-metre, 3-storey home for $35,000 a month during the race as they are off to a summer vacation in South Africa. This will be the couple’s first time to rent out their property, convinced by some yachting enthusiasts that their home has one of the finest views of the race.

Others like the Schelenoffs have listed on a website ResLux.com so as to book their homes as a rental during the summer yacht race.

Website owner Charlie Martin said that rentals could hit 3 to 5 times the average rental rates in the area, estimated at an average of $2,500 a month.

Third timers to rent their home are Mrs. Amanda and Mr. Vincent Hoenigan. Ms Hoenigan said in the WSJ interview that at times rents skyrocket to as much as $5,000 a day as the finals of the race draw near.

Last week, the ceremonial signing for the 2013 America’s World Cup has been held and was attended by Mayor Ed Lee and four time winner Sir Russell Coutts.