Did anti-regulation lobbying fuel the subprime crisis? This column shows that there is a strong relationship between financial industry lobbying and favourable financial regulation legislation. It argues that the financial industry fought, and defeated, measures that might have curbed some of the reckless lending practices that many think played a pivotal role in igniting the crisis.

At the end of 2007—as markets grappled with early stages of what would become the worst financial crisis in the post-WWII era and a severe recession seized the US economy—the Wall Street Journal reported that two of the largest mortgage lenders in the US spent millions of dollars in political donations, campaign contributions, and lobbying activities from 2002 through 2006 (Simpson 2007).

Ameriquest Mortgage and Countrywide Financial fought anti-predatory lending legislation in Georgia and New Jersey and fended off similar laws in other states and at the federal level, according to the newspaper.

In other words, the financial industry fought, and defeated, measures that might have allowed for a timely regulatory response to some of the reckless lending practices and the consequent rise in delinquencies and foreclosures that most think played a pivotal role in igniting the crisis. In 2009 the Centre for Public Integrity, a nonprofit, Washington-based investigative reporting organisation, linked subprime originators—most of whom are now bankrupt—to lobbying efforts to prevent tighter regulation of the mortgage market (Centre for Public Integrity 2009).

In fact, banks continued to lobby intensively against tighter regulation and financial regulatory reform even as the industry struggled financially and suffered from negative publicity regarding its role in the economic crisis (Labaton 2009).

As these anecdotes suggest, regulatory failure, in which the political influence of the financial industry played a part, may have contributed to the 2007 meltdown in the US mortgage market, which, by the fall of 2008, had escalated from a localised US crisis to become the worst spell of global financial instability since the Great Depression of the 1930s.

New research on contributions and regulation

To go beyond anecdotes and systematically study how much lobbying and campaign contributions affected US financial legislation in the years preceding the crisis, we develop a new dataset on the politically-targeted activities of US financial companies from 1999 to 2006 (Igan and Mishra forthcoming). We find that:

We focus on the US—not because lobbying does not exist in other nations—but because US transparency laws provide the level of detail on political spending and lobbying needed to do such an analysis.

The role regulations and other government activity play in financial crises is not a new issue. From a theoretical point of view, government actions to regulate the financial sector are well-justified to respond to market failures that may stem from moral hazard, asymmetric information, and systemic risk (Goodhart et al 1998). Yet in practice, many argue, these government actions contribute to, rather than mitigate, financial instability episodes. That is because politics and political pressures often interfere with the process of designing and implementing specific regulations, leading to unintended results (Johnson 2009, Calomiris 2009). In other words, private agents can alter the course of government action and manipulate the policymakers to obtain unjustified profits and tailor the financial regulatory landscape to fit their own needs.

But studying these outside pressures—within a formal framework using a broad sample of financial crises—is often constrained by the lack of detailed information on the political activities of the financial sector. As a result there has been little formal study of the relationship between the political economy and the alleged regulatory failures that may have contributed to financial crises. The recent global financial crisis presents a good opportunity to get a closer look into the issue because such detailed information can be obtained for the US, the epicentre of the crisis this time.

In our recent study, we look at the association between lobbying activities and risk taking by financial institutions in the run-up to the crisis. We find that lenders that undertook a heavy lobbying effort between 2000 and 2006 tended to engage more than other institutions in risky lending practices over the same period and suffered from worse outcomes during the crisis.

In a 2010 study, Mian et al (2010a) focus on the Congressional voting behaviour on two key pieces of legislation that shaped the regulatory response after the crisis. They also studied six bills before the crisis and found that aggregate campaign contributions from the financial industry play a significant role in explaining the voting patterns on these bills (Mian et al 2010b).

Lobbying and legislation: Evidence from a novel dataset

We compile a comprehensive dataset on the politically-targeted activities of financial companies during 2000-06. Specifically, we ask the following question: Did lobbying activity by the finance, insurance, and real estate industries have a direct impact on the voting behaviour of politicians, and hence, the passage of bills on financial regulation? In other words, did the politically-targeted activities of these industries help them obtain the desired outcome on the proposed bills, and hence, bring about the alleged regulatory failure? In addition, did politicians’ connections with the financial industry, which we dub Wall Street, and lobbyists, which we call K Street (where many lobbyists have offices), alter their voting behaviour?

We collect the following pieces of information: 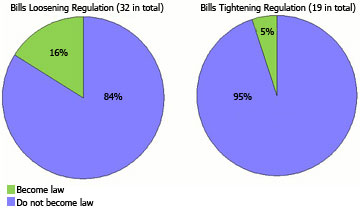 Next we explore whether the vote of an individual legislator on a particular bill is linked to the lobbying expenditures by firms affected by the bill and to the network connections he or she shares with the lobbyists and the financial industry. Three main findings emerge from the empirical analysis (Figure 2). 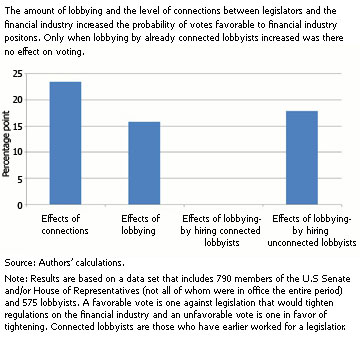 These findings support the notion that lobbying and network connections played an important role in shaping the financial regulatory landscape. Therefore, financial reform proposals should not be considered in isolation from these political factors. The precise policy response would depend on the true motivation for lobbying.

Economic theory suggests that lobbying could be driven by rent-seeking motives or a desire to reveal information. But, based on our findings, it is hard to distinguish what exactly drove lobbying by the financial industry. Specialised rent-seeking, eg in order to receive preferential treatment would require curtailing lobbying as a socially non-optimal outcome. If, however, lenders lobbied mainly to inform the policymaker and promote innovation, lobbying would remain a socially beneficial channel to facilitate informed decision making.

Read the original article by Deniz Igan and Prachi Mishra at VoxEU.org.