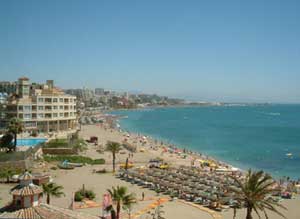 Amidst a backdrop of economic uncertainty, a depressed domestic property market and loans turned sour, it appears that confidence in the Costa del Sol, Spain, one of the most established second home destinations in the world, is on the up once again with leading house builder, Taylor Wimpey España recording a massive 74%% increase in sales so far this year.

Of the three Spanish regions in which Taylor Wimpey España specialise, Mallorca, Costa Blanca and Costa del Sol, the latter has by far seen the largest increase in sales compared to the same period last year with new developments such as Los Arqueros Beach in Marbella selling in record time.

Over 60% of this luxury new development, just 4 minutes' walk to the beach and amenities of San Pedro de Alcantara, has been sold off-plan since launch just 3 months ago.

"Whilst the domestic market in Spain is indeed suffering, the second home market is back with vengeance. Overall we have seen a 17% increase in sales to date in 2012 compared to the same time last year but the 74% increase in sales in the Costa del Sol is remarkable," shares Marc Pritchard, Marketing and Sales Manager for Taylor Wimpey España.

Taylor Wimpey España has been active in the Costa del Sol for 50 years now.  Mr. Pritchard says that they have experienced the boom days as well as the bubble bursting but have remained strong believers in the area as the perfect place to own a second home.

He adds that the company "invested €15 million into latest development Los Arqueros Beach in Marbella."

Taylor Wimpey España's commitment to the Costa del Sol has been well-received by local officials.

"Our region remains a benchmark for a sector as important as construction; this new project will create more than 160 jobs, both direct and indirect over the next five years, emphasising the social impact of Los Arqueros Beach in the area," Mayor of Marbella, Angeles Muñoz says at the sidelines of the inauguration of Los Arqueros Beach last week.

It's not just British buyers being drawn back to Spain. Taylor Wimpey España has sold properties to over 20 nationalities this year alone from Germans to Russians, Saudi Arabians and Australians.

One market which has shown particular interest in owning in Spain is Scandinavia with Taylor Wimpey España recording a 300% increase in sales from this region followed closely by Denmark with a 150% increase to date in 2012 compared to 2011.

"No longer is Spain and the Costa del Sol in particular the preserve of the British second home owner. With the fall of the euro and the reduction of VAT to 4% until the end of 2012, Spanish property has become much more affordable, attracting buyers from all corners of the world," adds Mr. Pritchard

Indeed the newly proposed law which will grant foreign buyers residency in Spain if they purchase a property worth more than €160,000 will surely boost the international demand for homes further and help propel the market in the right direction.

So with limited units remaining and prices from a very reasonable €190,000 + 4% VAT, well below the average asking price for the province of €298,300 (Kyero.com), now is the perfect time to buy with confidence at Los Arqueros Beach.