Housing transaction costs in the OECD

The problem of high transaction costs

People are increasingly buying property outside their own countries. The buy-to-let craze has gone international, and Britons and others are buying in Bulgaria, Turkey and Morocco, hoping to repeat the small fortunes they've built at home on rising property prices.

Yet there's a thorn in the flesh - the high costs of buying and selling residential property abroad (the transaction cost), and this has received surprisingly little attention from the financial press and from real estate agents. For property investors, these costs are a significant negative factor. In some OECD countries, such as South Korea, Belgium, Italy, these transaction costs are unnecessarily high.

A curiosity is also highlighted the fact that French legal origin countries, on average, have significantly higher transaction costs (14.2% of property value) than countries with German legal systems (11.9%), or Socialist (7.4%), English (6.5%), or Scandinavian (5.2%) legal origins. 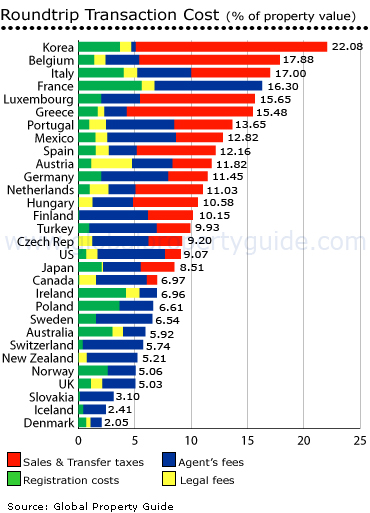 In OECD countries, roundtrip transaction costs are generally below 10%. This is a reasonable amount to pay in taxes and expenses in the buying and selling process, though it should be noted that in some countries, the total is only 3%.

However there are some countries with transaction costs which are really unnecessarily high. South Korea has the highest housing transaction cost in the OECD, at 22% of the property's value in Seoul.

On the other hand, total costs for purchasing a house in Slovakia, Iceland and Denmark are around 3% or less.

Transaction costs are typically between 5% and 7% in the UK, Norway, New Zealand, Switzerland, Australia, Sweden, Poland, Ireland, and Canada.

To make the calculations comparable, the Global Property Guide has assumed that the property purchased is a condominium worth either €250,000 for European countries or US$250,000 for other countries, and located in the financial or administrative capital. This allows a 'typical' transaction cost figure to be calculated, though in practice transaction costs are a range, depending on many factors.

Transaction cost figures reflect the purchase of old properties, not new (therefore in most cases Value-Added Tax (VAT) is not included). The costs also reflect foreigners' costs, not locals' (often very different). Where foreigners must purchase property through companies, the cost of forming and maintaining a company is not included.


Property and capital gains taxes are not included, although they must typically be paid before the property is registered. Fees in acquiring the prerequisites for property purchase such as residency permits and company formation are also not included.

South Korea's very high transaction costs are largely attributable to the unusual feature that all real estate transfers are subject to 10% VAT (only vacant land and government produced housing are exempt).

In most countries, in contrast, only new properties are subject to VAT.

Property buyers in South Korea are also obliged to purchase Housing Bonds worth 5% of the official price. Proceeds from the Housing Bonds are intended for construction of housing for the poor. Typically, most buyers immediately sell the bonds at a discount of about 10% to 15%.

These taxes are intended to dampen demand and discourage property speculation. However, in reality, these very high transaction costs exacerbate the housing shortage, by adding to the overall cost of housing. The costlier housing is, the less people can afford to buy it, the less gets built. The housing shortage can better be relieved by other means better rural transport and services, more competition in the construction industry.

French law is a handicap

Average transactions costs in countries with French legal origin are significantly higher than elsewhere, as noted in a previous article about European costs (Housing transaction costs in Europe).

The same phenomena is observed throughout OECD. Average transactions costs in OECD countries with French legal origins is 14.2% of property value; while in German origin countries the average is 11.5%, Socialist 7.4%, English 6.5%, and Scandinavian 5.2%.

Several OECD countries restrict foreign ownership of houses. In Iceland and Denmark, only resident foreigners are allowed to purchase houses. The property can only be used as primary residence and not as a rental investment.

In Switzerland, the Federal Government has set an annual quota of permits for non-resident foreigners seeking to acquire property. Generally, major cities such as Zurich, Geneva and Lausanne are closed to foreign buyers.

Foreigners need the approval of the Administrative Office (AOB) before they can buy property in Budapest. In Australia, approval of the Foreign Investment Review Board (FIRB) is needed.

Foreigners can freely buy condominium units in Poland but buying land is a bit trickier. Generally, a permit from the Ministry of Internal Affairs is needed.

In Turkey, property purchases are open to foreigners, on the basis of reciprocity, i.e., Turkish people must be entitled to purchase real property in the country of the foreign national buying property.

In Mexico, foreign buyers need to set-up a bank trust called 'fideicomiso' to be able to buy properties. The bank (trustee) holds the trust deed for the purchaser (beneficiary). While the trustee is the legal owner of the real estate, the beneficiary retains all ownership rights and responsibilities and may sell, lease, mortgage, and pass the property on to heirs.