Dubai, the most progressive emirate of the United Arab Emirates (UAE), started it all.

In 2002, the Dubai government announced that foreigners of any nationality would shortly be able to own freehold residential titles to these properties.

Soon, other countries in the Persian Gulf followed suit: Bahrain, Qatar and Oman.

Some property investors shy away because of the perceived political and security risks. However, good rewards await those who are willing to do their homework and explore the market better. Since the Gulf's 'for foreigners' market is still at its infancy, most properties sold to foreigners are off-plan. This has advantages and disadvantages. One advantage is that the buyer saves on the real estate agent's fee and legal fees, and the developer takes care of the property transfer procedure. In most cases, the developer also takes care of all maintenance and utilities like water, telephone and electricity connection.


The Middle East has low prices...

Because of their early stage of economic development, many Middle Eastern markets' property is still undervalued, leaving room for capital growth.

Properties in Egypt are quite cheap from a foreigner's point of view; prices range from US$400 to US$1,400 per sq. m.

Similar properties in Southern Europe would be two to three times more expensive. For instance, apartments in Barcelona, Spain cost around US$7,000 per sq. m.

Rental yields in the Middle East are also quite high.

For instance, yields in Cairo's Maadi district are typically in double digits, with earnings of up to 17% achievable on 250 sq. m. apartments. The tax environment is also extremely accommodating.

Due to rapid price increases over the past few years, rental yields in Europe have fallen to relatively low levels. Properties in Central Paris earn yields of no more than 4.4%. In Spain, gross rental yields hover from 2% to 4% only, barely covering costs. 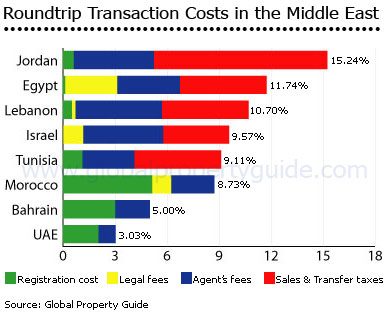 Investors will find that housing transaction costs are generally low to moderate in the Middle East.

The roundtrip transaction cost, i.e. the total cost of buying and re-selling a residential property, is highest in Jordan (at around 15%) and Egypt (11.7%).

Roundtrip costs in Lebanon, Israel and Tunisia are around 10%.

Not all the Middle East is 'open' Prospective buyers must check if they can buy in the country of their choice.

Members of the Gulf Cooperation Council (GCC) have already harmonized the rules for property ownership among their citizens. i.e. citizens of any GCC country can freely buy property in any GCC country. Bahrain, Oman, Kuwait, Qatar, Saudi Arabia, and UAE belong to the GCC.

For other nationalities, there are some ownership restrictions.

Morocco allows foreign ownership of residential and commercial real estate without any conditions or prior approval from the government (though foreigners cannot own agricultural land).

Tunisia, Israel, Jordan and Lebanon are generally liberal towards foreign ownership, though there are minor ministerial or regulatory procedures; Egypt is a little more complex.

Until recently, government officials in Tunisia discouraged investment in the real estate sector. Nonetheless, this policy seems to be being relaxed, though all real estate transactions are still subject to approval.

In Israel, foreigners can only own private land in Israel, and only 7% of all the land in Israel is privately owned. The remaining 93% is state-owned. State-owned lands can be leased for 49 years, which can be extended another 49 years.

In Jordan, foreigners can buy housing and land, provided Jordan and the buyer's country of residence have a reciprocal relationship, and that the approval of Council of Ministers is obtained. In the past, permission procedures were lengthy, but now approval can be obtained in just 10 days. Foreigners can only sell the property five years from acquisition.

In Lebanon, foreigners can acquire up to 3,000 square meters (sq. m) of land. Any bigger than this, a prior decree from the Council of Ministers is needed.


Road to ownership is tougher in Egypt

Foreigners cannot buy more than two pieces of real estate in Egypt, the size of which cannot exceed 4,000 square meters (sq. m.), and their purpose must be for a family member to live in the property. The purchase must have the approval of the Council of Ministers, which takes around two months. If registered, the property cannot be sold or rented for five years. Finally, the property must be rented furnished after the 5 years period, which has tax disadvantages.

There is a way for foreigners in Egypt to go around these restrictions, a process which allows resale or rental of the property immediately. Through the 'signature validity court verdict' process, purchasers issue a power of attorney to their lawyer. The lawyer files a legal suit to obtain a court verdict certifying that the signature on the sale / usufruct contract truly belongs to the seller (this is the 'signature validity court verdict'). But this process requires patience (this suit will take between 6-8 months), the investor's full trust of his Egyptian lawyer (only Arabic contracts are recognized in courts). 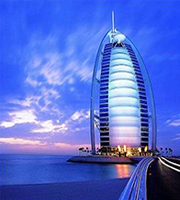 As the pioneer, Dubai offers the widest range of choices for property ownership. Some of the developments available for foreign freehold ownership are: The Palm, Jumeirah, Emaar Towers, The Greens, International City, and others.

The six other emirates in the UAE are following Dubai's initiative. They have set aside special enclaves for foreign ownership.

Foreign ownership of residential properties in Bahrain is also available in Durrat Bahrain, Amwaj Islands, Bandar Al Seef, Riffa Views, Bahrain Finacial Harbor, Lulu Islands and Danat Hawar. In Oman, foreign ownership is allowed in Integrated Tourism Complexes or ITC. Current ITC areas are in the capital, Muscat and the Greater Muscat Area. In the future, the southwest Dhofar region is expected to be an ITC.

In Qatar, the foreign ownership is allowed in The Pearl, West Bay Lagoon, and Al Khor development. However, In Qatar ownership is actually a 99-year renewable usufruct.

Since the market is still at its infancy on most of the Gulf countries, almost all properties are bought directly from the developer. Almost all properties sold are off-plan. This has certain advantages and disadvantages. One advantage is that the buyer saves on real estate agent's fee and legal fees. The developer also takes care of the property transfer procedure. In most cases, the developer also takes care of all maintenance and utilities like water, telephone and electricity connection.

However, there is also uncertainty on how much capital appreciation the buyer can get from the investment. In Qatar, the developer has the right of first refusal for property re-sale. 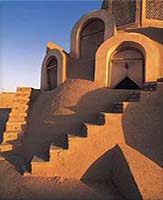 In Saudi Arabia, foreigners are allowed to own real estate, subject to approval of the licensing authority. However, foreign ownership is forbidden in Mecca and Medina, except through inheritance.

In Iran, foreigners may own or lease property provided such property is for commercial or industrial use, or for a personal residence. If a foreign resident changes his domicile, he is required to transfer the title of his immovable property to an Iranian or a duly qualified foreigner within six months of departure, to prevent adjudication by the Land Registration Office.

Buyers also need to be very careful when purchasing property. Most countries in the Middle East are ranked lowly in terms of property rights.

In the Medina in the old-walled district of Fez, the third largest city in Morocco, houses do not have titles. Instead, an official scribe 'adoul' writes scrolls to document the ownership of the houses. These scrolls can date back hundreds of years.

In Egypt, about 92% of urban and 87% of rural properties is not officially registered. A study in 1997 by Peruvian Economist Hernando de Soto showed that it can take 6 to 14 years to buy desert land, build a house and register the property following all the legal procedures. The entire process required the individual to carry out 77 bureaucratic procedures in about 35 different private and public offices.