Rents: Can landlord and tenant freely agree rents in Guam?

Rents are freely negotiated by landlord and tenant. However, Guam has a Rent Control Law with very limited application to verbal rental agreements only.

Under Guam's Rent Control Law, no landlord may raise the monthly rental of any tenant who occupies a residential unit used as a primary residence pursuant to a verbal rental agreement by more than 5% per annum.

Guam's Rent Control Law expressly states its application does not extend to the rest of the rental market and thus will not apply to written rental agreements or to the rental of non-residential property.

There are no statutory provisions controlling the amounts or uses of security deposits or rental deposits.

What rights do landlords and tenants have in Guam, especially as to duration of contract, and eviction?

Rental agreements can be created for any term mutually agreed upon by the landlord and the tenant. The rental agreement may also contain a termination provision that will allow either party to terminate the agreement prior to expiration of the term. Landlord and tenant can freely agree to a termination provision, as well as the notice that will be required for either party to terminate the agreement before the term expires.

If a rental agreement does not specify a term, Guam law will imply duration depending on the type of property being rented. Rental agreements for residential property without a specified term are presumed to have been made for such length of time as the parties adopt for the estimation of rent, not to exceed one year. Thus, a monthly rate of rent is presumed to create a month-to-month rental agreement. The minimum required notice to terminate a periodic tenancy the same as the term of the tenancy. For example, if the tenancy is month-to-month, the tenant must give the landlord one month's notice of its intent to terminate the tenancy.

Any verbal agreement shall be for an initial period of one year, and during such period the tenant may not be evicted except for nonpayment of rent or for damage or destruction of the rented premises. At the expiration of such one year period and thereafter, the landlord must give the tenant at least 90 days notice of eviction, except in case of nonpayment of rent or damage or destruction of the rental premises by the tenant. Guam law makes no exceptions for notice or eviction when the landlord needs the premises for his own use or for any other reason. Further, the landlord may not evict a tenant or terminate a verbal rental agreement for the sole purpose of increasing the rent on premises. 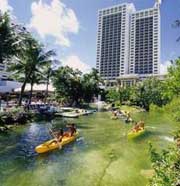 If a tenant of real property remains in possession after the expiration of the term, and the landlord accepts rent from him, the parties are presumed to have renewed the lease on the same terms and for the same time. The renewal term will not exceed one month when the rent is payable monthly and in no case will the renewal term exceed one year. Guam law will not apply the presumption of renewal if, within one month of the end of the term implied by law, one of the parties gives notice of his intention to terminate the lease.

Eviction of tenants for default in payment of rent is relatively simple and straightforward under Guam law, as discussed more below.

The laws governing landlord and tenant issues are contained in the Guam Code's chapter on the hiring of real property. The Superior Court of Guam (the trial courts) have jurisdiction over these issues.

How effective is the Guamanian legal system?

Guam's ejectment statutes enable expeditious enforcement of tenancy law by the courts. A landlord may file a complaint for unlawful detainer in court to regain possession of the rented property and obtain a judgment for unpaid rent if a tenant continues in possession after default in payment of rent and the landlord has given 5 days' notice in writing to tenant requiring payment of rent or demanding possession of the property. Because the tenant can usually be located at the rented premises, service of process can usually be accomplished on the same day the landlord files a complaint.

A defendant in such an action is only given 5 days within which to answer the complaint, instead of the 20-day period given for all other civil actions, and although the defendant may assert defenses, he is not allowed to raise any counterclaims. The tenant will be commanded to appear at a hearing scheduled within 5 days after the complaint is filed. If the tenant does not appear, the court may enter his default. Otherwise, a trial is scheduled shortly thereafter. Unlawful detainer trials are given preference above all other civil actions brought before Guam courts. The duration of a trial varies depending on the complexity of the issues presented in a complaint for unlawful detainer and the defenses raised by the tenant. Typically, however, a trial in an unlawful detainer case lasts no longer than a few hours.

If judgment is rendered in favor of the landlord after trial, the tenant will be ejected from the premises and may be liable for up to three times the amount of the unpaid rent. After the landlord has obtained a judgment against the tenant, the landlord may immediately enforce the court's ruling by seizing the rented premises with the assistance of court marshals, which typically takes one to three weeks, and enforcing the judgment as to any money damages.

The landlord-tenant laws of Guam are distinctly pro-landlord. This is largely due to the fact that Guam adopted its civil laws from the U.S. state of California in the early 1950's. Although the recent decades have marked a strong shift in the United States toward a pro-tenant leaning, including rent-control legislation, Guam has been slow in adopting these changes and has continued to rely on its original civil laws.