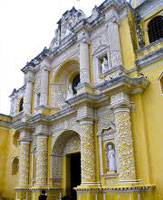 Guatemala is the Mayan heartland of Central America, and its indigenous culture is alive and well.  That culture survives in the ancient ruins of Tikal, in the Mayan-Catholic rituals of Chichicastenango, and the blazing colors of everyday Mayan dress.

Guatemala does not have a great variety of ‘purchase destinations’ to offer.  There are no good beaches.  Foreigners who buy properties in Guatemala typically settle in the city of Antigua (different from the Antigua island in the Caribbean), and on Lake Atitlan.

However in 2009, Guatemala was thrown into international limelight when President Alvaro Colom was accused of ordering the assassination of an opposition lawyer, Rodrigo Rosenberg. The accuser was the lawyer himself, who left behind the videotaped accusation, to be viewed only if he was killed.

This highlights the growing problem of political violence. Politicians, journalists, businessmen and even bus drivers are routinely killed in broad daylight in the capital, Guatemala City.

Antigua (pop 22,000) is a charming Spanish colonial town and, though earthquakes have done much damage over the centuries, there is much Spanish heritage.   It is a refuge for elite Guatemalans, being only 45 minutes’ drive from Guatemala City, the capital, which is highly polluted and congested.

Despite the violence, and Guatemala’s other defects, Antigua is an extraordinary historic environment which attracts many tour groups, and therefore also people settling to do business.

Pre-crisis, in Antigua prices had been rising strongly – perhaps by around 20% per annum – until the recession in the US, and the current increase in violence.  An authentic 3-4 bedroom colonial home in central Antigua with a fountain and yard in the central area with 1-2 kitchens, 2 living rooms and 2 bathrooms plus maids’ quarters, would cost about $600,000.

For a well-maintained, larger footprint, greater scale home, the price tag could rise dramatically to around $2,000,000.  A newly built, slightly out of town starter home would cost about $300,000.

What’s happening now?  “Prices of property in Antigua are now stable,” says Brian Wilson, of Century21 Casa Nova Real Estate.   “Activity is down by around 50% for a year ago, and this is certainly related to the economy in the US and worldwide.

“The normal source of funds by foreigners has been drastically reduced from shrinking investment portfolios, and devaluation of existing properties that were to provide the necessary capital to purchase a property abroad.

“We have seen more product being introduced to the market, which in our opinion indicates that people are selling assets to counter the economic downturn. These houses are generally second or weekend homes owned by Guatemalans in the capital.

“This actually creates a great advantage for potential purchasers, as these homes are generally never on the market, and offer some outstanding properties.”

Years after the end of the civil war in 1996, the rising level of violence and crime hounds Guatemala. Many former rebels and combatants (the army was halved after the war) joined criminal gangs or drug and crime syndicates, engaging in extortion, kidnapping, robbery and prostitution.

“Guatemala’s current agony, though of a diverse and disparate nature, has its roots in U.S. policy in the region for much of the last 40 years,” notes journalist Michael Deibert in the World Policy Blog.

“Through skills learned from counterinsurgency campaigns, and particularly during the regimes of dictators General Romeo Lucas García (1978–82) and his successor General Efraín Ríos Montt (1982–83), elements of Guatemala’s military intelligence services were able to create complex criminal networks that exist more or less intact to this day.

“Two of the biggest crime syndicates in the country, La Cofradía (The Brotherhood) and El Sindicato (The Syndicate), are both made up of current and former military officers, according to Guatemalan and U.S. government officials.

“La Cofradía is said to be chiefly directed by two former generals, Manuel Callejas y Callejas and Luis Francisco Ortega Menaldo, while the dominant force in El Sindicato is alleged to be Otto Pérez Molina, a former army officer and head of the Partido Patriota. Pérez Molina came in second to Colom in the 2007 presidential ballot.”


President Colom’s people are the same Ortega Menaldo’s people, explains Diebert.  They are one side of a two-sided, mutually hostile, narco-crime-dominated political establishment

Some experts estimate that up to 40% of the country is dominated by drug traffickers and organized crime syndicates. In 2008, more than 130 bus drivers were killed in Guatemala City, the capital. The drivers were apparently assassinated after bus operators and bus union leaders refused to pay protection money.

“The accusations surrounding President Colom´s involvement in the assassination of Rosenburg have not dwindled,” says Casa Nova Real Estate’s Wilson.

“Several gatherings have taken place in the country, mainly in the capital. As a counter measure to the educated population, the ruling party saw fit to bus in several thousand villagers to support the party, and denounce the accusations. These villagers were bussed to the capital free of charge, given food and money to attend, and were given signs to carry in support for the President. But when questioned by the press, the response was that they really had no idea what they were protesting, but were happy to attend for the benefits the government was offering them.”

Nevertheless, Wilson adds: “As far as crime is concerned, it centres around certain areas of the capital were poverty is rampant. As more and more unregistered Guatemalans are being deported from the US, and with little or no employment possibilities, crime is just a natural way to exist when there is no money available to support yourself. Thankfully, this problem has not filtered down to the main tourist areas such as Antigua, Lake Atitlan and Tikal.

“Tour groups are still visible on the streets of Antigua, and have actually increased somewhat, due to influx of cruise ship visits. The casual tourist seems to be a bit less, and we attribute that to the economy in general worldwide.”

“As far as Antigua is concerned, it´s life as normal. There has been no exodus to greener pastures, and the city is peaceful with good police protection.”

Unlike other Latin American countries, remittances from US did not create a housing boom in Guatemala. For instance, demand for properties from US-based Salvadorians led to construction of new exclusive subdivisions in several areas in El Salvador. This was not the case in Guatemala.

Remittances from Guatemalans in the US and other countries, which reached US$4.3billion in 2008, were used to gradually improve self-built housing units. Most houses in Guatemala are constructed by cementing one wall at a time.

Any flagrant display of wealth (such as acquisition or construction of a brand new house) is an open invitation to robbery and/ or kidnapping. Hence, most recipient households prefer to keep a low-profile carefully try to hide their wealth.

Guatemala has an unusual number of high-end real estate purchases often paid in cash. There was also a noticeable boom in high-rise apartments and office buildings in Guatemala City, says Sigfrido Lee in an article published in the Time Magazine. However, this real estate boom was likely financed by money laundering committed by drug cartels and crime syndicates. Lee, a former economic minister and now an analyst in a private think tank, notes that there are entire condominium complexes that never sold any units.

To say that Guatemala’s economy is reliant on the US is an understatement. More than 50% of Guatemala’s exports are sent to the US. Remittances, at 12% of GDP in 2008, plus other transfers and grants provided as much foreign currency earnings as the entire export industry.

With the US economy in recession, remittances to Guatemala dropped 11.4% y-o-y to US$282 million in February 2009. Remittances are vital to the economy as it support millions of families. It provides money for food, shelter and basic health care.

Higher remittances combined with increases in exports and earnings and investment pushed GDP growth to 5.4% in 2006 and 6.3% in 2007. Economic growth slowed down to 4% in 2008 and is expected to drop further to 1%.

Under Guatemalan law, foreigners can acquire, maintain and dispose of real property with very few restrictions.  Foreigners cannot own land directly next to rivers, oceans or international borders.

Foreign investors must realize that corruption is a fact of life in Guatemala and be prepared to encounter it at all levels. The registered value of properties is typically a tenth (or less) of the real selling price, this is done to minimize the 12% sales tax and the annual property tax.

In 2001, Congress passed a law allowing the use of foreign currencies in all transactions. Most real estate transactions are quoted and concluded in US dollars.