Guatemala is the Mayan heartland of Central America, and its indigenous culture is alive and well. That culture survives in the ancient ruins of Tikal, in the Mayan-Catholic rituals of Chichicastenango, and the blazing colors of everyday Mayan dress.

Guatemala does not have a great variety of 'purchase destinations' to offer. There are no good beaches. Foreigners who buy properties in Guatemala typically settle in the city of Antigua (different from the Antigua island in the Caribbean), and on Lake Atitlan.

However in recent years, Guatemala has been thrown into international limelight due to several occasions of high-profile killings and violence, and corruption scandals inflicting politicians and highly influential people. In 2009, then President Alvaro Colom was accused of ordering the assassination of an opposition lawyer, Rodrigo Rosenberg. In March 2010, Guatemala's police chief and anti-drug tsar were fired over the theft of cocaine. In March 2014, ex-President Alfonso Portillo was found guilty of accepting millions in bribes from Taiwan in return for a promise of continued recognition by Guatemala.

Then in April 2015, Guatemala has been gripped by a corruption scandal following revelations of a massive customs fraud network known as La Línea (The Line) operating at the highest levels of the government. The scandal, which was considered as the greatest political crisis in the country's recent history, led to the resignation and arrest of former President Otto Pérez Molina and his vice president, Roxana Baldetti, and dozens of other public officials. The revelations sparked a nationwide wave of protests and a widespread hostility towards the current political system.

These events highlight the growing problem of corruption and political violence in the country. Politicians, journalists, businessmen and even bus drivers are routinely killed in broad daylight in the capital, Guatemala City.

Jimmy Morales, a former TV comedian without any experience in government, surprisingly won the country's presidential elections in October 2015 as he effectively managed to portray himself as "un-corruptible" and a "political outsider" amidst a wave of popular anger against the current political system. Morales pledged to fight graft and corruption.

Yields are high in Guatemala

Rental yields for houses in Antigua City are around 4% to 8%. For houses near Lake Atitlan and the coastal area near the Pacific, yields are around 7.5% to 10.5%. Per square meter (sq. m) prices in these areas are higher than in Guatemala City at US$1,300 to US$1,550.

Rental Income: Rental income earned by nonresidents is taxed at a flat rate of 25%. Income-generating expenses are deductible when computing the taxable income.

Leasing real estate is subject to VAT at 12%.

Inheritance: Inheritance and gift taxes are levied at progressive rates, from 1% to 25%.

Residents: Guatemalan residents are subject to income tax on Guatemalan-sourced income only.

The total cost of registering property is around 1.15% of the property value. The five procedures required can be completed in about 23 days.

Tenancy laws are neutral
between landlord and tenant in Guatemala 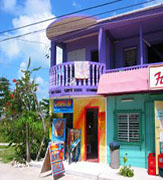 Rent: Rents can be freely agreed between landlord and tenant. Rent indexation clauses are permissible, and normal.

Tenant Security: The Civil Code establishes that, when the terms or concepts of a contract are clear, and there is no doubt about the intention of the contracting parties, the text of the contract must be interpreted literally.

The law can be slow. There are a lot of opportunities for defendants to introduce delays. 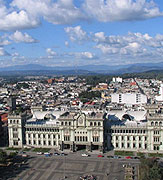 To say that Guatemala’s economy is reliant on the US is an understatement. More than 50% of Guatemala’s exports are sent to the United States. Remittances, at about 10% of GDP in 2014, plus other transfers and grants provided as much foreign currency earnings as the entire export industry.

Remittances are vital to the economy as it support millions of families. It provides money for food, shelter and basic health care. Remittances are also one of the major drivers of the housing market in Guatemala.

In 2014, the economy posted a robust economic growth of 4.2%, up from the real GDP growth rates of 3.7 in 2013 and 3% in 2012 and the highest in seven years, thanks to infrastructure projects and spending increases ahead of the presidential elections.

The economy is projected to expand by 3.8% this year and by another 3.7% in 2016, according to the International Monetary Fund (IMF).