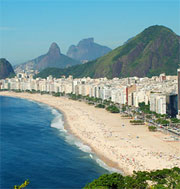 Property prices are skyrocketing in Brazil. The construction sector is booming. And the mortgage market is expanding rapidly. But there is a growing concern that all this is unsustainable. And imbalances in the economy — an overvalued currency and high inflation — are exacerbating the dangers of the looming credit and property bubble.

The average asking prices of new apartments across the country soared by 24.7% in April 2011 from a year earlier, according to Exame Magazine (using data from Ibope Intelligence, the largest Brazilian market intelligence firm).

Based on the Ibope Intelligence figures, in April 2011:

The FIPE ZAP Index of Dwelling Price Offers shows Sao Paolo dwelling prices up 25.9% during the year to April 2011, and up 83.7% over the past 3 years.

In just two years (2008-2010), the average selling price of new one-bedroom apartments in São Paulo almost doubled. Newly launched two to four-bedroom apartments increased in value by between 40% and 60% over the same period, according to Embraesp, a local real estate research firm.

Looking longer term, from 1996 to 2010, prices of newly launched apartments in São Paolo rose by almost 229% (131.6% in real terms), according to Embraesp, as the accompanying graph shows. For all years since 1996 price rises have been strongly positive, except in 2007, when house prices dropped slightly due to Lula’s stringent inflation targeting (Brazil’s inflation rate was just 3.6% in 2007). Prices in Sao Paolo, for instance, dropped by 1.6% in 2007.


Two major international sporting events are helping to arouse foreign interest in Brazil - the hosting of the 2014 Soccer World Cup, and the 2016 Olympics.

Most analysts agree that house prices will continue to rise in the second half of 2011. Knight Frank’s Global Residential Market Forecast sees Brazilian residential property prices rising by 5% in 2011.

The situation in Brazil is not dissimilar to the recent US experience, argue worried analysts. Mortgage credit is being pushed by banks to homebuyers, especially to low and mid-income first-time homebuyers who are very sensitive to interest rate movements.  However while in the US, mortgage loan rates were very low, in Brazil interest rates are high, which arguably poses even more danger.

Now, as interest rates go up in Brazil, many analysts worry about the ability of first-time homebuyers to finance their mortgage loans. From 2007 to 2010, real credit to the private sector soared by nearly 200% in Brazil, according to the IMF. In 2011, big banks in the country expect 20% growth in loans.

Roberto Attuch of Barclays Capital Sao Paolo estimates that the residential real estate debt of average mortgage-holders in Brazil rose from 25% of income in June 2006, to around 40% in November 2010.

In April 2011, two small banks in the country were bailed out. Some analysts expect that more banks will declare bankruptcy in the coming months.

Alert to the danger, the country’s central bank, Banco Central do Brasil, has been fast in introducing measures to curb consumer credit and foreign loans.

The Brazilian economy grew by an impressive 7.5% in 2010, its fastest GDP growth rate in 25 years, making Brazil the 5th largest economy in the world. The economy did not avoid recession in 2009, but contraction was minimal at -0.64%.

Sound economic management under Lula da Silva’s government led to falling inflation and foreign debt. After weak 1.15% growth in 2003, the economy grew by an average of 4.3% from 2004 to 2006, before growing by more than 5% in 2007 and 2008. This was in sharp contrast to the average annual growth of 1.7% from 1998 to 2002.  Tight control of government spending led to a budget surplus in the first two years of Lula’s presidency, lowering Brazil’s credit risk.

Lula da Silva’s success in reducing poverty has led to a dramatic expansion of the middle class - the key driving force behind the country’s housing boom.

The middle class now makes up about 74% of the total population, up from just 49% in 2005, according to a recent report by Cetelem Bank.  In the last five years, the average Brazilian’s purchasing power has increased by more than 40%, and about 34 million people have been lifted from poverty into the middle class. From 2002 to 2008, average Brazilian real incomes grew by an average of 8% annually, according to MB Associados, a local research firm.

The Brazilian real estate market has traditionally been focused on the higher segments and in major cities like São Paulo and Rio de Janeiro. However, recently the expanding Brazilian middle class has replacing wealthy international buyers as a focus of attention.

Developers like Cyrela (the market leader with a 10% market share in Sao Paolo and 25% share in Rio de Janeiro)  have shifted from luxury and mid-high-end projects, to the “economic” and “middle” segments, i.e., to middle-class buyers.

Lula’s pro-market reforms have greatly helped expand Brazil’s mortgage market. The first big break was the government’s approval of fiduciary alienation, whereby the buyer becomes the owner of the property only after it has been fully paid. The bank or lending institution holds ownership of property, while the loan is being repaid.

This gives banks security, if buyers default. In the past, banks were reluctant to lend to households, because Brazilian courts were biased in favour of borrowers.

In addition, Brazil’s new SFH, or the housing finance system, offers households an opportunity to turn their higher incomes into mortgage payments. Resources are administered by Caixa.

Brazil has traditionally been included among countries with the highest interest rates in the world. However, rates have gradually fallen in the past several years. From a rate of nearly 30% in 1998, the Selic, Brazil’s central bank benchmark rate, was slashed numerous times, reaching 8.65% in August 2009.

However, since March 2010, the government raised the benchmark rate several times, reaching 11.92% in May 2011, mainly to curb inflationary pressures.

Rental yields are generally falling in Brazil, which can be attributed to the continuous rise in property prices in the country.

In Sao Paolo, rental yields for apartments range from 6% to 8.2% by end-2010, according to the Global Property Guide. Penthouses in Sao Paolo can produce yields from 5.6% to 7.4%.

Inflation has accelerated. In April 2011, the inflation rate stood at 6.5%, the highest since 2005 and above the 4.5% target.  In an effort to tame inflationary pressures, the government has raised the benchmark interest rates several times since March 2010.

However rising rates caused a foreign investment surge.  Net inflows totaled BRL55.5 billion (US$35 billion) in the first quarter of 2011, more than the total net inflows for the whole year of 2010.

This has led to the government to resort to “macroprudential measures” to curb inflation without boosting the currency, including raising bank reserve requirements, taxing on consumer credit, foreign bond issues, overseas loans, and the like.

Rio de Janeiro, Brazil’s second largest city and former capital, has the most expensive housing in the country, followed by São Paulo. The table below shows property price movements in the country.


A look at the average prices of units sold by Cyrela Brazil Realty, Brazil’s largest developer provides a glimpse of house price movements in each segment. During the year to end-Q1 2011,

There is still enormous unmet need for housing.  Brazil still has Latin America’s highest level of inequality. This is very visible in the favelas on the hilly outskirts of Rio de Janeiro and other cities.

"In Brazil there are eight million families (equivalent to 30 million people) who do not have a house to live in," said Joao Crestana of Secovi-SP.

Home ownership is at 75%, with only about 14% of the 42 million housing stock rented. But around 85% of all homeowners live in low quality, self-built, single-room housing units.

My Home, My Life

During the 8-year term of former president Lula da Silva, a pragmatic approach that combine the free market with social support for the poor and workers was introduced, similar to a European social democracy. To build one million houses under the housing program Minha Casa Minha Vida (My House, My Life), launched in March 2009, the government initially allocated BRL36 billion (US$22.7 billion).

Then in March 2010, the second stage of the program, which plans to build an additional two million houses, was included within the government’s PAC (Growth Acceleration Program). The government allocated a budget of BRL39 billion (US$24.6 billion) for Minha Casa Minha Vida in 2010 and another BRL40.1 billion (US$25.3 billion) in 2011.

Of the total three million houses:


Under the program, subsidized mortgage loans were extended to middle and lower income homebuyers through the state-owned bank, Caixa Economica Federal.

About 500,000 units will be delivered by the end of 2011, according to Planning Minister Miriam Belchior.

All eyes on Northeast Brazil

Northeast Brazil, the poorest region in Brazil, is now catching up with the prosperous Southern Brazil. Though the Northeast region remains the poorest, with 28% of the country’s total population but accounts for just 14% of GDP, the region has become the country’s star economic performer in the past decade.

The Northeast has become a popular holiday destination for wealthy Brazilians in recent years, thanks to its fine beaches.

Prior to the recession, investment opportunities here were concentrated on tourism, and the second-home luxury market geared towards European buyers.

Second-home buyers from the southern and central regions have also turned their attention to Northeast Brazil. Coastline properties in Northeast Brazil are still a lot cheaper than those near São Paulo or Rio de Janeiro.

“Right now, the northeast is one big building site,” says Federal Integration Minister Fernando Bezerra Coelho. The port and industrial complex of Suape is being expanded. A petrochemical plant and a huge car factory are under construction. The government is expanding the Atlantic coastal highway. Over a hundred firms have moved in. The 2014 World Cup stadium is being constructed in Natal.

Dilma Rousseff, who assumed office in January 1, 2011, is the first female elected President of Brazil. She is following the footsteps of former president Lula, who was responsible for reform packages like the Minha Casa, Minha Vida, and Bolsa Familia (an anti-poverty programme).

“With the election of Rousseff, the Brazilian property market has at least another ten years of growth,” said Flavio Cabrera of Lopes Real Estate Consultants.

“The Workers Party (Lula’s and Rousseff’s political party) government was the best thing that could have happened in the history of construction in the country since it was the only ruling party that has created real incentives for the industry,”