After booming in early-2000s, Slovenia's property market weakened in 2008 due to the global economic crisis. The following years were difficult. House prices fell every year till 2014, at least in inflation-adjusted terms.

House prices started to recover in 2015 and had been on a rising trend since then, even despite the Covid-19 pandemic in recent years.

Demand remains stable. In the first half of 2022, the total number of dwelling transactions was almost unchanged from a year earlier, to 6,791 units, according to the Statistical Office of the Republic of Slovenia. In terms of transaction value, dwelling sales reached €884.09 million (US$940.08 million) in H1 2022, up by 7.4% from the same period last year.

Foreigners have been able to buy property since February 2003, on a reciprocal basis. Reciprocity is a principle verified by the Ministry of Justice (MoJ) based on the Law on Reciprocity (Official Gazette No 9/99). Then following accession to the EU in 2004, EU citizens may now buy properties in Slovenia without restrictions.

Despite rising interest rates, total lending for house purchases increased by 11.6% to €8.15 billion (US$8.6 billion) in Q3 2022 from the previous year, based on the figures from the Bank of Slovenia.

Residential construction activity continues to rise modestly. In the first ten months of 2022, the number of dwellings for which permits were issued increased by 2.8% to 3,655 units as compared to the same period last year. Over the same period, the total useful floor area of dwellings was almost unchanged to 492,963 sq. m.

The overall economy is slowing, though. In the third quarter of 2022, Slovenia's economy grew by 3.4% from a year earlier, a sharp slowdown from the previous quarter's 8.3% y-o-y expansion and the lowest growth seen since Q1 2021, according to the country's statistics office. Despite this, the European Commission expects the Slovenian economy to expand by a robust 6.2% this year, before slowing to just 0.8% in 2023.

How much will you earn? Gross rental yields on apartments are moderate in Ljubljana, at around 4.7% to 5.1% in the city centre, and higher outside. To define terms, the gross rental yield is the rent the landlord will earn - before taxation, vacancy costs, and other costs - compared to the purchase price of the property.

The gross rental yield in the Old Town is about 4.7%-5.1%. For these areas we used the Global Property Guide´s own research.

How much do apartments cost? Apartments in the Old Town of Ljubljana cost on average, EUR 3,600 per square metre (sq.m.). In the nearby areas apartments tend to be cheaper, we found in previous years, selling for around EUR 2,300 per sq. m. In the city´s surroundings, EUR 1,450 per sq. m. is more usual for an apartment, EUR 1,000 for a house.

House prices in Slovenia have been rising, according to the Statistical Office of Slovenia.

How easily will you rent your property? Anecdotally, properties can be quite hard to let. Ljubljana is a small place. The number of expatriates, embassies, and international companies is small, which again restricts the supply of tenants.

Capital Gains: Capital gains realized from the sale of properties are taxed varying rates, depending on how long the owner held the property prior to the sale.

Inheritance: Inheritance of spouses and direct descendants are not taxed in Slovenia. Other heirs are liable to inheritance tax and the applicable progressive rates vary depending on the relationship between the donor and the recipient, and the value of the property.

Residents: Residents are taxed on their worldwide income at progressive rates, from 16% to 50%.

Buying costs are moderate in Slovenia

Roundtrip transaction costs are around 4.434% to 8.26% of the property value. The 2% Transfer Tax is paid by the seller while the real estate agent’s fee at 4% (plus 20% VAT) is typically split between buyer and seller. 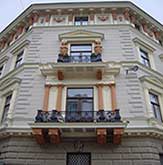 Rent: Rent and rent increases can be freely negotiated but must be based on the market rate. In theory, rents must not be 50% higher than average rents in the same local municipality. In practice, this is not followed; landlords can draw contracts and change it as they wish.

Tenant Security: If the contract is for a definite period of time, the landlord has no obligation to renew the contract. If there has been no renewal 30 days before contract expiration, the tenant has to vacate the apartment at the day of expiration.

In the third quarter of 2022, Slovenia’s economy grew by 3.4% from a year earlier, a sharp slowdown from the previous quarter’s 8.3% y-o-y expansion and the lowest growth seen since Q1 2021, according to the country’s statistics office.

The European Commission expects the Slovenian economy to expand by a robust 6.2% this year, before slowing to just 0.8% in 2023. On the other hand, the International Monetary Fund (IMF) projects a more conservative 2022 growth forecast for Slovenia of 5.4%.

“Slovenia’s economic outlook has become more challenging,” said the IMF. “Uncertainty is also unusually high and risks are predominantly on the downside. The key risks stem from the war in Ukraine and include further commodity price increases, lower external demand, and supply chain disruptions. Inflation could also remain high for longer, possibly triggering higher wages and higher inflation expectations, which would in turn require a tighter policy stance.”

“Other risks include a possible correction in real estate prices, which are seen as overvalued,” added the IMF.

Annual inflation stood at 10% in November 2022, sharply up from just 4.6% in the same period last year and one of the highest levels seen in the past 26 years, according to the Statistical Office of the Republic of Slovenia. The surge in inflation was mainly driven by the continued increase in commodity prices, as well as in fuel and energy prices.

During the April 2022 parliamentary elections, Robert Golob won a surprise victory over veteran right-wing populist Prime Minister Janez Jansa. Golob will lead a three-way centre-left coalition between his green Freedom Movement and the Social Democrats and the Left. Golob pledged to reform politics in the country and focus on addressing problems in healthcare and containing rising energy and food prices.

Recently, Natasa Pirc Musar became Slovenia’s first female president by winning 54% of the votes cast in the second round of the presidential elections held on November 13, 2022. The role of a president is largely ceremonial, but holds authority in the country’s foreign affairs and defence.