Rents: Can landlord and tenant freely agree rents in Lithuania?

Rents can be freely negotiated between landlord and tenant. However on renewal of a tenancy contract, the tenant has the right to first refusal. If he cannot agree terms with the landlord, he may go to court for arbitration of the amount of rent.

The tenant must pay the rent not later than the 20th calendar day of the following month, unless other periods are provided in the contract.

The landlord cannot ask for more than the first month in advance.

What rights do landlords and tenants have in Lithuania, especially as to duration of contract, and eviction?

A lease for more than one year must be in written form. If the period is not stated in the contract, the contract is deemed to be for an indefinite period.

On expiration the lessee has the priority right to renew for a new term, and for the same duration, except where the previous contract exceeded twelve months. In that case the contract is renewed for twelve months, unless the parties agree otherwise.

If the tenant disagrees, he must inform the landlord in writing within a month, otherwise he shall be deemed to have agreed, and he shall have the right within a month of receiving notification to apply to the court for the determination of the conditions of the contract of lease through judicial proceedings.

The lessee can dissolve the lease by warning the landlord in writing a month in advance.

The right of occupancy is enjoyed by the lessee's family members.

The landlord may evict the tenant:


In such cases, the landlord does not have to provide an alternative dwelling.

How effective is the Lithuanian legal system?

The Lithuanian Civil Code Chapter 28 is the main applicable legislation, as well as the Law on the Leasing of Land, 1993. 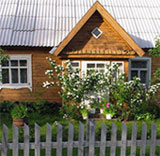 The housing stock was rapidly privatized after the re-foundation of the State of Lithuania on March 11, 1990. Today 97.6% of the housing stock is in private ownership. The rental sector is very small - if one excludes the 8% of the population who live in buildings owned by friends, only 3% rent from a private person, according to Statistics Lithuania (though the Free Market Institute's Household Study produces higher figures).

Since 1990, state-led construction has collapsed and the private sector has not compensated. So the number of newly completed residential dwellings has dramatically declined from 22,100 in 1990 to 3,785 in 2001. A related change is that proportionately more single-family dwellings are being built. Lithuania's housing stock offers primarily one to two room dwellings (54.3%), though it is true that Lithuanian households are small, composed on average of 2.6 persons.