Tenant protection laws are significant but not onerous

Ireland has strong tenant protection laws. The parties are free to negotiate rents, but the amount must not exceed the open market rate. The rent may be reviewed and can only be adjusted once a year. Rent disputes go to the Private Residential Tenancy Board (PRTB). Security of tenure is effective for four years; during the first six months, the landlord can terminate the leasing contract without specifying grounds but once a tenancy has lasted six months, the landlord can only terminate the tenancy for the next 3 ? years citing just causes. Irish law is pro-tenant.

Rents: Can landlord and tenant freely agree rents in Ireland?

The parties to the contract are free to agree rents, however rents may not be charged above the market rent. Rent may be reviewed (upward or downward) once a year only.

Tenants are to be given 28 days notice of any new rents. A tenants? right to request a rent review annually cannot be contracted out of. Disputes about rents go to The Private Residential Tenancies Board (PRTB).

There are no maximum deposits.

What rights do landlords and tenants have in Ireland, especially as to duration of contract, and eviction?

At the end of the 4 years, a new tenancy will commence and the cycle begins again unless otherwise agreed upon, i.e., the landlord can give notice without stating a reason within the first six months.

Tenants may give notice at any time without giving a reason, subject to any fixed term lease or agreement contained in the contract; the periods of notice are indicated below.

Regardless of why the termination is occurring, the periods of notice to be given by the landlord and tenant depend on the length of the tenancy, as follows:

Landlords have to register details of their tenancies within a month with the Private Residential Tenancies Board (PRTB), with registration fees of ?70 per unit.

Despite anything to the contrary in a lease or tenancy, where a landlord withholds consent to assignment or sub-letting, the tenant may terminate the tenancy. Leases for more than one year (now rare) must be in writing.

How effective is the Irish legal system?

It is generally accepted that landlord and tenant law is one of the most complex and involved fields of Irish law. The new PRTB hearings attempt to resolve this. The fees are not expensive. Legal representation should not be necessary. Costs will not be awarded except in exceptional circumstances. The dispute resolution process operates informally. But enforcement of the orders of Board not complied with, will be through the Court.

Recent changes in Irish landlord and tenant law Irish landlord and tenant law comprises a mix of the common law (judge-made law), and statute law, including (distantly) the Landlord and Tenant Law Amendment Act, Ireland, 1960; the Conveyancing Act, 1882; and more recently, the Rent Restrictions Act, 1960 and 1967; the Housing (Private Rented Dwellings) Acts 1982-1983; and the Housing (Miscellaneous Provisions) Act, 1992. But undoubtedly the most important legislation is The Private Residential Tenancies Act, 2004.

During World War 1, the British Parliament passed measures of rent control and security of tenure. These persisted into the post war period, and eventually became the Rent Restrictions Act 1960, an extremely complex set of restrictions.

The restrictions survived until the early 1980s, when they were the subject of a constitutional challenge. In Blake v Attorney General (1981) the Supreme Court ruled that Parts 11 and Parts 1V of the Rent restrictions Act 1960-1967 were unconstitutional in that they amounted to an ?unjust attack? on landlords? property rights. The legislation, the Supreme Court complained, provided no compensation for landlords subject to rent control, and almost permanently alienated the property from the landlord. Following Blake, more moderate legislation was passed, designed to phase out the formerly rent-controlled sector by 2002 (the Housing (Private Rented Dwellings) Acts of 1982-1983). The net result was that tenants became largely unprotected from eviction, and the rent market was free. 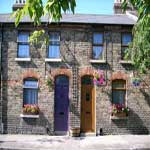 This brought a reaction. Following campaigns by Threshold, a housing NGO, the Housing (Miscellaneous Provisions) Act 1992 was passed which provided new rights: more notice-to-quit, minimum standards of accommodation, and the right to a rent book, plus a system of registration. It also abolished the old common law right of the landlord to seize his tenants? property in lieu of rent (distress). However the Act did not address security of tenure, and there was another Threshold campaign, which resulted in the present, more anti-landlord Act.

A tennant has a one year lease on a property. Tennant decides to move out after 7 months as they found another place. There has been no dispute between landlord or tennant. Does the tennant get their deposit back? As they have broken the lease agreement.

What charges or costs can a landlord deductfrom a tenants deposit?

For instance, if the tenant asked for the gas fire to be removed during the tenancy because he could afford to pay for the gas heating and wanted instead to light the fire, could the landlord charge for getting an authorise bord gais person to have it removed and replacec after the tenant leaves ?
Indeed what other items or charges can he apply?
Jim

My issue is the following: we have a lease contract of an apartment till the end of August but we decided that we wont stay any longer here.
We have given the landlord 2 months notice in advace that we will stop living in this house from July onwards. Us as tenants, can we loose our deposit? The landlord is threathening us that we must get someone to occupy the house until the end of August otherwise we will loose our deposit.
Where do we stand? I think that the landlord inst registered. Hope someone can help, thanks

my question is : we moved new place of apartment, having lived for three months, we have damaged the water boiler, we could not use water, we report landlord on this and other challenges, we have lived another three months boiler is still not repaired've contacted with landlord than nothing but not directed to the right, or we may terminate the contract and not pay for the current rent.Thanks.

I've gone through this beatiful document and have no comment but to ask for a favour.

I live in a country(Liberia - West Africa) where nothing like this exist and as a result tennants live at the mercy of the landlord. For example whenever the need for repair arises the landlord look in ur eyes and say he is not reponsible. Now with what i have just read i need leglislation just as this what can i do, go to my member of parliment, please advise

hi.
i share house with other tennant nearly 2years.and we have new one years lease on a property after that when we get price down.But i decide and want to move out another place.. There has been no dispute between landlord or tennant.Does that mean i get my deposit back or no? If i get back but ho shut be pay me that landlord or other tennant ho sty in owe there..As i no brok the lease agreement.

My family and I have been renting a home for over 30 years from our landlord at a fixed rate. Should the property pass to the landlord's son, and he decides he wishes to change the terms or even redevelop the site, then what protection/compensation do you think we may be entitled to? The relationship between us and the landlord and his son is highly amicable but it is possible the son may want to change the terms or even sell the land the property is located on.
Many thanks.

hi just found out that our tenants have been subletting our house for the last 2 years. Lease due for renewal. .was with management company who have obviously not done their job. Where do I stand...do I ask for more rent ? Arrears? Lease nul and void? Hold the deposit? kick them out ? or chase the management company for compensation.....any advice welcome????

Ireland’s housing market is heating up

Ireland’s housing market steady, though transactions are down