“Investments in the sector have been resilient and reliable for many owners, as properties continue to hold their value and have even increased in worth, despite the climate,” said Petal James, Chief of Branches at JN Bank. “And, while some levelling off has been predicted, prices are not expected to decline.”

The government-owned company, the National Housing Trust (NHT), which leads the mortgage market with almost 50% market share, recently introduced special relief measures to continue to stimulate the housing market in the wake of the global pandemic. These include:

“These measures are to safeguard persons from losing their homes while improving their disposable income,” said Prime Minister Andrew Holness. “Effective immediately, mortgagors who are laid off can apply for a moratorium on all loan payments of three months in the first instance,” Holness added.

Foreign interest in Jamaica's housing market has risen in recent years. Vacation homes located in Montego Bay area, Ocho Rios, and Negril are attracting foreign homebuyers. Interest in Port Antonio is also slowly rising after an airport expansion in the area, according to Nicola Delapenha of Coldwell Banker Jamaica.

Vacation homes are priced from US$ 800,000 to US$10 million, according to Seventh Heaven Properties managing director Walter Zephirin.Foreign investors dominate this high-end market, while young Jamaican professionals who are first-time homebuyers fuel demand for mid-income bracket properties.

Demand for homes costing J$25 million (US$ 174,800) and below have grown strongly in recent years, while houses worth above J$40 million (US$279,700) had the least growth. Demand remains stable for townhouses, apartments, and for properties in gated communities.

The number of tourists in Jamaica plunged by about two-thirds to just over 1.1 million visitors in the first ten months of 2020, after record arrivals in 2019.

There are no restrictions on foreign ownership of property in Jamaica.

Prices of apartments and houses have continued stable in Kingston and St Andrews during 2010, continuing the trend of 2009. The exception is a decline in the prices of the largest houses, which fell sharply between 2008 and 2009.

Gross rental yields remain very strong, especially on apartments, with 2 bedroom apartments reaching yields of around 10%. This would seem to suggest that Jamaica’s residential property market is firmly-based.

Income taxes are high in Jamaica

Capital Gains: There are no capital gains taxes in Jamaica.

Inheritance: Transfers of property as inheritance taxes is taxed at 7.5%.

Residents: Resident are taxed on their worldwide income at a flat rate of 25%.

Buying costs are high in Jamaica

Round-trip transaction costs are between 16.49% and 22.32%. The buyer and the seller are separately liable for their own legal fees. But both are jointly liable for the Stamp Duty of 4%.

The seller pays the real estate agent’s commission of 3% to 5%, which is subject to 16.50% General Consumption Tax (GCT). The transfer tax of 5% the property value is usually paid by the seller.

Jamaican law is pro-tenant, but in practice high-end rental agreements often ignore the law and practice is pro-landlord.

Rents: Rents and rent increases for all commercial and residential premises are set and regulated by the Rent Assessment Board. The standard rent is prescribed by the Minister and is currently set at 7.5% of the property’s assessed value.

Tenant Security: Lease agreements can either be short-term or long-term. A landlord cannot evict a tenant without a court order. It takes a minimum of 105 days to evict a tenant. 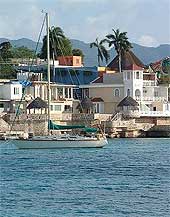 The economy is estimated to have contracted by a record 8.6% in 2020 mainly due to the economic repercussions brought by the COVID-19 pandemic.

“COVID-19 continues to impact and disrupt trading partners, we look at the US, our source market for tourism and we understand that there is a significant fear and panic in those markets so it would impact our visitor arrivals,” said Economic Programme Oversight Committee (EPOC) co-chairman Keith Duncan. “So, the impact on our economy is highly uncertain.”

Last year, Prime Minister Andrew Holness unveiled an economic aid worth $25 billion, the largest fiscal stimulus in Jamaica’s history, to cushion the impact of the pandemic. In May 2020, the IMF approved Jamaica’s request for emergency financial assistance amounting to US$520 million under the Rapid Financing Instrument (RFI) to help meet the urgent balance of payments needs of the country arising from the health crisis.

Despite this, both Standard and Poor’s and Fitch Ratings recently affirmed their credit ratings for Jamaica at B+, but changed their outlook from stable to negative for S&P and from positive to stable for Fitch.