Property prices in Seychelles' high-end have risen continuously over the past several years.

At the Eden Island, an exclusive marina development on reclaimed land linked to Mahe by a bridge, residential property prices have almost doubled over the past eight years, according to local experts.

"This represents an average eight to 10% year-on-year increase in property values. Over and above this, a rental division provides an option to achieve very good rental yields, with a strong demand among holidaymakers, particularly from France, Germany, Italy and South Africa," adds Immelman.

Eden Island has about 450 luxury two- and three-bedroom apartments, mansions and villas. It has a clubhouse, tennis court, gym, swimming pools and four beaches. By the first half 2015 over 480 homes had been sold, at a total value of SCR5.71 billion (US$440 million).

At the Four Seasons Private Residences Seychelles, an exclusive residential development on Petite Anse Bay on Mahe's southwest coast, four- to six-bedroom villas are priced at about SCR102.3 million (US$7 million).

Owning a property in such residential developments typically grants residency rights for the owner and his immediate family.

Property in Seychelles is expensive. Dwelling prices in Mahe, the capital, start at SCR2.1 million (US$160,000), according to Jean-Paul Maurel, director at Premium Realty, and a furnished two-bedroom house sells for about SCR8.3 million (US$640,000).

Land and property prices in the capital vary considerably depending on location. For land with no view, the average price was just SCR731 (US$56) per square meter (sq. m.). However for prime beachfront properties, the average price stood at SCR21,921 (US$1,689) per sq. m.

In Praslin, the Seychelles' largest island, property prices are about 20% higher than in the capital because most properties are located on or near the beach.

Most foreign buyers pay cash. Foreigners can secure residency in Seychelles for a fee of SCR50,000 (US$3,852). There are no property taxes or capital gains taxes in Seychelles but a foreign homebuyer should expect to pay a processing fee of 1.5%, a sanction duty of 11%, and a stamp duty of 5%.

Purchasing requires Government Sanction from the Cabinet Ministers of the Ministry of Land Use and Habitat. The property must be used only for residential benefit of the buyer and his family. A minimum of SCR1 million (US$77,047) must be brought into the Seychelles, and converted to Seychelles rupees (SCR) to be used for the transaction.

Yields are low to moderate in the Seychelles

But the rents which properties will produce are also low. A 150 sq. m. property costing US$180,000 might typically rent for around US$700 per month. This is equivalent to a yield of 4.7%. Larger properties produce lower yields, as is typical in most places.

Rental Income: Gross rental income earned by nonresident individuals is taxed at a flat rate of 15%.

Capital Gains: There is no capital gains tax

Inheritance: There is no inheritance tax in Seychelles.

Transaction costs are moderate to very high in the Seychelles 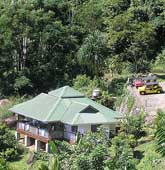 Round-trip transaction costs, i.e., the total cost of buying and selling a property, are around 12%. All costs are paid by the buyer.

Buyers should note that there are unresolved issues relating to government land confiscations in the 1970s and 1980s. The owners were never compensated, and if the East European and Ugandan cases are followed, this could become an issue in future.

Seychelles is regarded as the richest country in Africa, with a GDP per capita of US$25,229 in 2015. The country owes much to the ample opportunity for shipments and fishing due to a plethora of coastline. In addition, Seychelles has long been known as a gateway for the rich and famous due to its numerous hotels and shopping resorts.

Seychelles’ economic growth slowed sharply in 2014, posting a real GDP growth rate of just 2.9%, from an average of 6.6% from 2010 to 2013, based on figures from the International Monetary Fund (IMF).

Tourism accounts for about 70% of the country’s revenues and contributes about 25% of GDP. In 2014, there were about 232,667 tourist arrivals in Seychelles, up slightly by 1.04% from a year earlier, according to the country’s National Bureau of Statistics (NBS). Europe accounted for almost three-fourth of all visitor arrivals.

During the first seven months of 2015, the total number of tourist arrivals in Seychelles surged by 17.2% to 152,250 persons from the same period last year.

The economy is projected to grow by a modest 3.5% this year and by another 3.8% in 2016, mainly fueled by the recovery of the country’s tourism sector and the appreciation of the Seychelles rupee, according to the IMF.

Seychelles became the 161st WTO member in April 26, 2015, which is expected to boost economic growth.

"Seychelles shall now have access to the markets of all 160 WTO members. WTO membership ensures that Seychelles will contribute to on-going multilateral negotiation processes to ensure that we can create more opportunities for wealth creation and prosperity while also defending the countries' approach to development," said Seychelles Minister of Finance, Trade and the Blue Economy Jean Paul Adam.

Politics was dominated by France Albert René and the Seychelles People's United Party (SPUP), which seized power in 1987 in a coup against the popularly-elected pro-business party.

The results of socialist-style policies included high levels of government expenditures, an array of state trade and monopolies, and an abundance of concessions and exemptions.

Opposition parties were legalized in 1991, but René won the elections held in 1992.

Parliamentary elections in 2002 saw another victory for René's party, but there was a mood of change in the air, and the opposition Seychelles National Party increased its representation from one to 11 seats. In 2003 the Government introduced a Macroeconomic Reform Programme (MERP), slashing Government spending, increasing taxes, and restoring a budget surplus.

The René era finally came to an end in April 2004, when the president resigned and was succeeded by former vice-president James Michel (who is nevertheless a member of Rene’s party and a close associate). The Government is now said to be moving more rapidly toward reform.

In the presidential elections held last May 2011, James Michel was reelected as president of Seychelles.